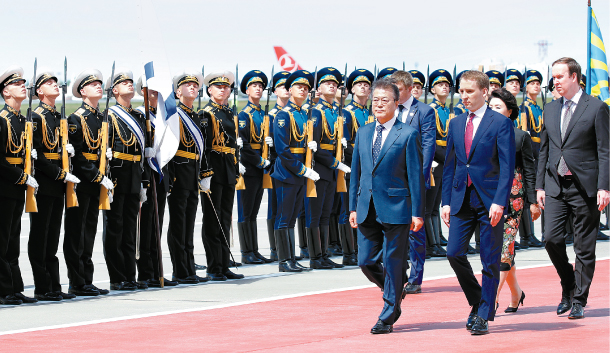 President Moon Jae-in, front, is greeted by an honor guard at Vnukovo International Airport in Moscow on Thursday as he kicks off the first state visit to Russia by a South Korean leader in 19 years. He also became the first South Korean president to address the State Duma, Russia’s lower house. [YONHAP]

President Moon Jae-in urged Russia to join a Northeast Asian economic community amid “a historic paradigm shift on the Korean Peninsula” in a speech to the Russian legislature, the first by a South Korean leader, in Moscow on Thursday.

“When a peace regime on the Korean Peninsula is established, economic cooperation between North and South Korea will become regularized and expand to trilateral cooperation involving Russia,” Moon said before the State Duma, the Russian legislature’s lower house.

On Thursday, Moon kicked off a three-day state visit to Russia, the first by a South Korean president since Kim Dae-jung’s trip in 1999.

In his speech to the Duma, Moon mentioned his first summit with North Korean leader Kim Jong-un in April and the result of that meeting, the Panmunjom Declaration. He also touched on the subsequent North-U.S. summit, the first ever between the leaders of both countries, earlier this month.

South Korea and Russia are already researching and discussing trilateral cooperation in rail, gas and electricity, Moon said, adding that cooperation in these areas can create “a strong foundation for a Northeast Asia joint economic community.”

“A stable peace regime between South and North Korea will enable the advancement of a multilateral peace and security cooperation regime in Northeast Asia,” Moon said.

The president called for expanding technological cooperation with Russia, which is leading in basic science. Combined with Korea’s strength in information technology, the two countries can “jointly lead the way toward a new era of the fourth industrial revolution.”

“The Korean people desire peace and co-prosperity not only on the Korean Peninsula but all of Northeast Asia,” Moon said.

Moon arrived at Vnukovo International Airport in Moscow on Thursday with Kim Jung-sook, the first lady. They were greeted by a Russian honor guard.

On the schedule, he has a meeting with Russian Prime Minister Dmitry Medvedev, an event celebrating relations between the two countries and a Korea-Russia business forum.

On Friday, Moon will meet with Russian President Vladimir Putin and attend a banquet. This marks their third summit since Moon first met Putin during the Eastern Economic Forum in Vladivostok last September.

“Currently, discussions are focused on trilateral talks among the two Koreas and United States or four-way including China,” a high-ranking Blue House official said, “but Japan and Russia can also join and play considerable roles” on the future of the Korean Peninsula.

“In the long run,” the official said on the condition of anonymity, “we need to return to a six-party arrangement.”

The six-party talks, which involved the two Koreas, China, Japan, Russia and the United States discussing the North’s denuclearization, ended in 2009 after the North walked away from them.

Moon plans to squeeze in some football during his stay in Russia, which is hosting the World Cup. The president will watch South Korea play Mexico in the southern city of Rostov-on-Don on Saturday and return to Seoul later that day after the match.