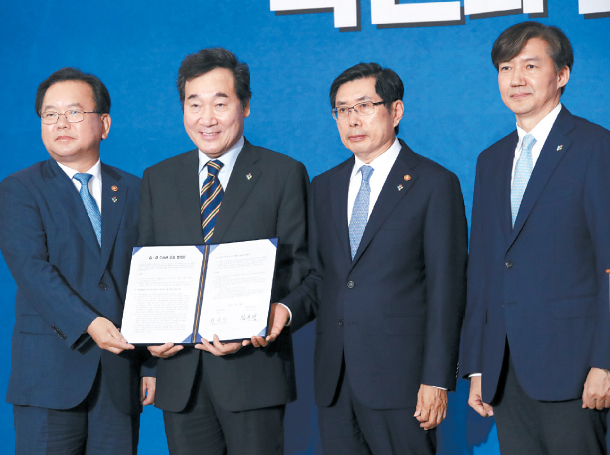 From left: Minister of Interior and Safety Kim Boo-kyum, Prime Minister Lee Nak-yon, Minister of Justice Park Sang-ki and Cho Kuk, the presidential senior secretary for civil affairs, pose for a photograph after signing an agreement to adjust powers between the police and prosecution. [YONHAP]

The Moon Jae-in government announced Thursday a plan to end the prosecution’s monopoly over directing criminal investigations by giving additional powers to the police as part of the administration’s campaign to reform the criminal justice system.

At the Central Government Complex in central Seoul on Thursday, Prime Minister Lee Nak-yon announced the results of an agreement reached between the Ministry of Interior and Safety and the Ministry of Justice on readjusting judicial authority between the police and prosecution.

Cited as a preliminary step towards ending a longstanding turf war between the two agencies, the agreement is supposed to reduce the prosecution’s current judicial preeminence over the police, which for decades has voiced discontent about its subservient status.

The trimming of the prosecution’s powers also reflects the public’s distress over its lack of political neutrality as evidenced by numerous investigations done at the behest of the Blue House, including a corruption investigation of former President Roh Moo-hyun that may have driven him to commit suicide in 2009.

“The government upholds the principle that the police should be granted greater independence regarding initial investigations and the prosecution must be more faithful to their role of exercising judicial control,” Lee said. “The relationship between the prosecution and police will be leveled.”

The proposed revision, though it gives police greater investigative latitude, leaves the power to indict in the hands of the prosecution and provides it with an additional right to request reinvestigation by the police if it deems the preliminary probe to be insufficient. Those are seen to be compromises in favor of the prosecution.

Kim Boo-kyum, minister of interior and safety, who is formally in charge of the police, and Minister of Justice Park Sang-ki, who has formal authority over the Supreme Prosecutors’ Office, put their signatures to a document drafted by the Blue House after months of prolonged consultation with officials from the police and prosecution. The resulting agreement stands as a compromise among divergent recommendations raised by the two agencies, but has also been cited by some legal analysts as being tilted in favor of the police.

“The government’s time to discuss adjustments of investigative powers is over, and it is now time for the National Assembly to act,” added Lee near the end of his announcement, passing the baton to the legislature, whose ratification is needed codify the agreement into law. “Even if partial amendments are needed, we hope the spirit of this agreement is preserved for the sake of ending this long dispute and reforming our criminal justice system.”

Responses to the agreement among the prosecution have so far been generally negative. “In a situation where there is no clear distinction between administrative and judicial police, now the police even have control over ending investigations on their own,” said a prosecutor working in Seoul. “It’s obvious that the police chief will be vested with excessive power despite having no experience in judicial matters.”

Due to its broad investigative powers and authority to indict, the prosecution has long been viewed as one of the most powerful agencies in the Korean government.

With few checks on its vast authority, prosecutors had virtually free reign to conduct lopsided - and often politically partial - investigations and in extreme cases actively engaged in corruption themselves. Under authoritarian governments of the past, the prosecution often served the interests of the executive, amassing influence by actively pursuing public security cases that frequently entailed incriminating dissidents.

Intimacy with the halls of power allowed the prosecution to emerge unscathed during Korea’s transition to democracy in the late 1980s, and it has been accused of abusing its judicial powers to the point that even elected officials were unable to curtail its independent streak.

During the Park Geun-hye administration in particular, a series of corruption scandals involving prosecutors erupted that further shook the agency’s credibility in the eyes of the public, aggravated by the fact that former prosecutors staffed key positions in the executive branch. Former Presidential Chief of Staff Kim Ki-choon and former Senior Secretary for Civil Affairs Woo Byung-woo, both notable former prosecutors, were eventually jailed on power abuse charges.

“The Korean prosecution behaves like a quasi-party, composed of social elites with conservative mind-sets locked in a rigid hierarchy,” said Cho Kuk, the president’s current senior secretary for civil affairs, in an interview with a civic group when he was a law professor. “They fight against political authorities that seek to limit their power, and collaborate with those who may benefit them.”

A vocal advocate for prosecutorial reform, Cho’s appointment to his position by Moon was understood by many to be a signal of an impending restructuring of the criminal justice system. Serving as the intermediary between the Interior and Justice Ministries, Cho played a central role in bringing the agreement into fruition after lengthy negotiations.

Riding public dismay over power abuses by prosecutors - which came to a boiling point during the 2016 candlelight vigils against his predecessor Park - Moon had promised sweeping reforms of the criminal justice system during the snap elections that followed Park’s impeachment in March last year.