City grapples with trash after banning food on buses

City grapples with trash after banning food on buses 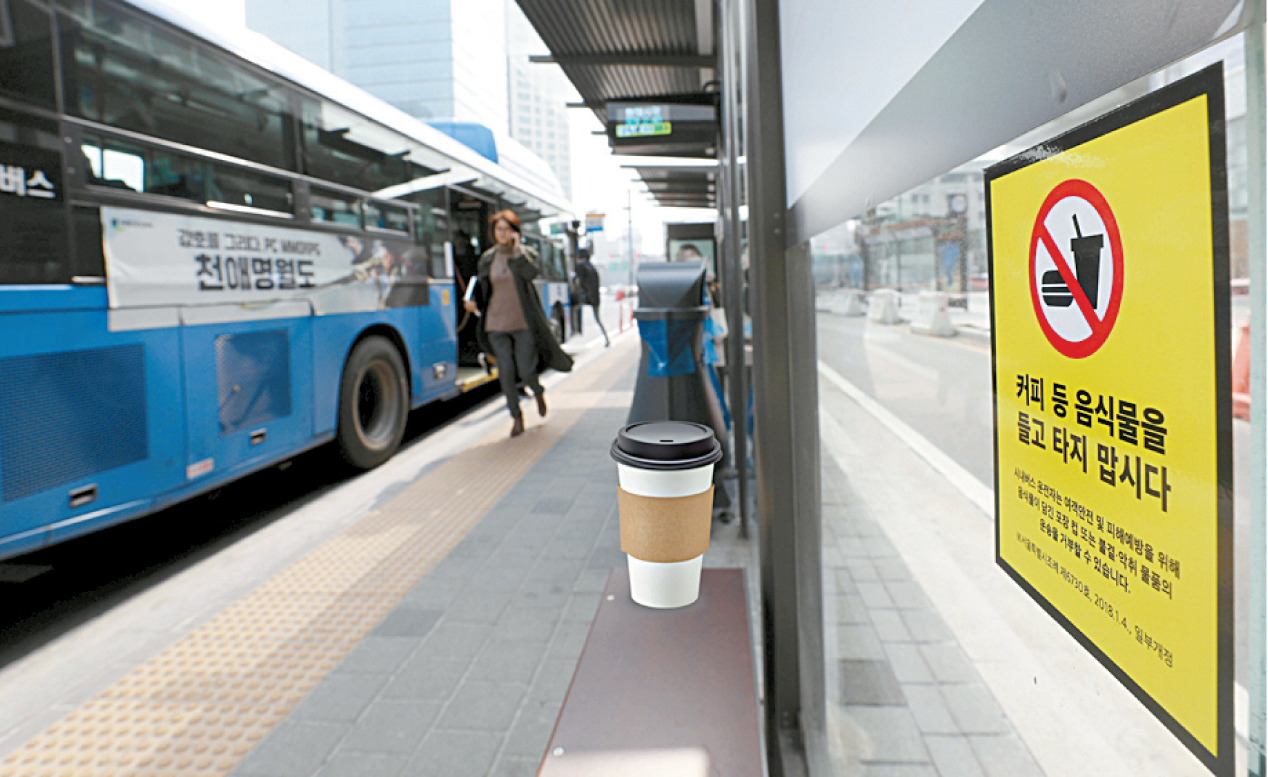 After Seoul banned passengers from bringing food and beverages onto buses in January, garbage has been piling up at bus stops around the city.

Now, with warmer weather, Seoulites are complaining about the rotten smell that all the trash is causing.

“Because passengers often throw out food and drinks right before they get on the bus, the trash cans are often overflowing, and the area is just reeking,” said a 22-year-old student at Yonsei University, who was waiting for the bus near Sinchon Station in western Seoul.

The trash can at the bus stop on Wednesday afternoon was half-filled with plastic cups and other garbage. Most of the cups still had liquid inside that was now oozing out of the trash can and onto the sidewalk.

In January, the Seoul Metropolitan Government imposed a ban on passengers bringing food and beverages onto public buses. Drivers are permitted to deny passengers “with unsanitary or foul-smelling items” as well as “items that might disturb other passengers.”

Before the ban, about 38,000 people ate on the bus every day, according to city bus companies. That’s an average of five to six people eating on each bus. A JoongAng Ilbo poll of 80 bus drivers found that the most common items were tteokbokki (spicy rice cakes), chips, peanuts, bread, hamburgers, gimbap (rice rolls) and hotteok (honey and nut-filled pancakes).

Since January, the city government has placed a sign at every bus stop asking passengers not to bring food and drinks on board and informing them that bus drivers can legally stop them from boarding. The ordinance has drawn the ire of many passengers.

“I often get coffee on the go to drink while waiting for the bus,” said Lee Jin-ah, 24. “But some bus stops in the city do not have trash cans nearby, and I am often torn between emptying the cup at a nearby tree or just leaving it at the bus stop.”

In May, the city government requested that local district offices ensure at least one trash can is available near each bus stop. The plan would entail installing 370 additional trash cans.

But even with a bin at each bus stop, the city government has yet to find a solution for the smell. One government official said the office was receiving many complaints about reeking trash cans near bus stops.

In October, the Seodaemun District Office came up with a novel idea: separating liquid waste from solid ones. Three bus stops in the heavily trafficked Sinchon area received a receptacle where people can empty out liquid before tossing the cups in recycling. The receptacle is connected by hose to a nearby sewer.

But when a reporter visited two of them on Wednesday, both liquid waste receptacles were clogged.

“We’ve found noodles, chicken bones and other food waste inside these trash cans designed for liquid waste only,” said Lee Young-hwa, an official at the Seodaemun District Office’s maintenance division. “Sometimes, drunk people throw up in the trash cans.”

The district office said it plans to move one of the three liquid waste bins near Sinchon Station to another area after people complained of the smell. The office had initially planned to install more liquid waste bins, but that plan has been put on hold.

The Seoul city government has not provided a solution yet on proper liquid disposal at bus stops. One official went so far as to ask people to take the trash home.

“Even if we install more bins near bus stops, if the garbage is not properly separated, it will smell,” the official said.

“Local district offices will have to hire more people for maintenance,” said Hong Soo-yeol, head of a recycling research institute in Seoul, “and perhaps we should start a deposit system where people are refunded money when they properly recycle.”