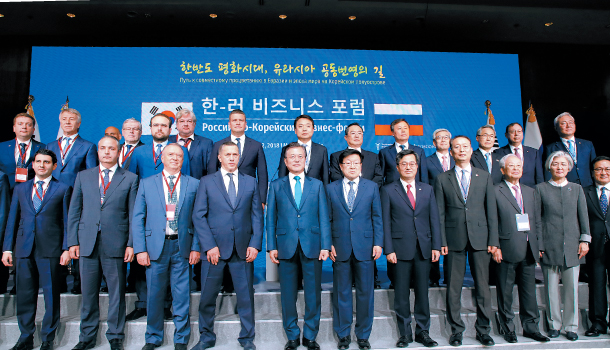 Businessmen from Korea and Russia pose for a photo before the Korea-Russia business forum kicked off on Friday in Moscow, with President Moon Jae-in in the center of the front row. Some 280 businessmen and government officials from both countries attended the forum, which preceded a summit meeting between President Moon and Russian President Vladimir Putin. [YONHAP]

South Korean President Moon Jae-in said that Russia and Korea would seek to create a free trade pact to drive economic growth in a speech Friday in Moscow.

Moon’s speech at a Korea–Russia business forum proposed that the two countries increase their trade volume by 58 percent from $19 billion last year to $30 billion and double the number of workers and students exchanged to 1 million by 2020.

“A Korea–Russia free trade agreement (FTA) will be the starting point,” said Moon.

Moon and Russian President Vladimir Putin agreed in a summit following the business forum to embark on a process in each country to launch negotiations over service and investments.

“I hope the [scope of the FTA] will expand to products in the future so that a mutually beneficial and reciprocal FTA can be forged imminently,” Moon said.

Korean automakers have been increasingly demanding the government create a trade deal with Russia, due to their upbeat growth potential in the country.

A research center under the Korea International Trade Association, a public company that hosted the business forum, released a report Monday that backs up Moon’s proposal. He said Korea must seek an FTA with the Eurasian Economic Union, which includes five former Soviet states — Russia, Armenia, Belarus, Kazakhstan and Kyrgyzstan.

Moon emphasized that the two countries need to create synergy by joining forces in science and technology. Russia has advanced space technology, and Korea excels in information and communication technologies. Moon mentioned ongoing shipbuilding and medical service projects as positive examples of cooperation between the two countries.

The president went on to say that preparation for trilateral cooperation between the two Koreas and Russia should start now. “This is the right time,” he said. “If businessmen take the lead, the Korean government will help out.”

The business forum was attended by 150 Korean businessmen from 101 companies, government officials and 130 Russian counterparts from state-run railroad and energy companies as well as those who wish to launch trade partnerships and invest in Korea.