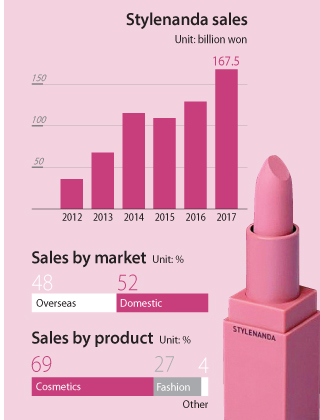 French cosmetics giant L’Oreal has completed its takeover of Korean fashion and makeup company Stylenanda just 50 days after it first announced that it would acquire 100 percent of the company.

L’Oreal said on Thursday that it will operate Stylenanda separately from L’Oreal Korea’s four existing divisions.

L’Oreal explained that it intends to encourage the creativity of Stylenanda’s fashion business and its makeup brand 3CE.

Kim So-hee, 35, the founder and former CEO of Stylenanda, will serve as its chief creative executive. “Kim will continue to contribute to the success of Stylenanda by providing major input in both the fashion and makeup divisions of the brand, “ said a L’Oreal official.

L’Oreal did not disclose the exact amount it paid to take over 100 percent of the fashion brand, but considering that Stylenanda originally planned to sell 70 percent of its shares for 400 billion won ($361 million), industry sources estimate the company was sold for between 570 billion won and 600 billion won.

L’Oreal’s focus in acquiring Stylenanda was its makeup brand 3CE. Although Stylenanda started out as a clothing business in 2004, ever since it launched 3CE in 2009, makeup has propelled the brand’s growth. 3CE is popular both domestically and in China and Southeast Asia, and makeup products now account for 70 percent of Stylenanda’s total sales. L’Oreal believes that it can effectively target Asian markets, including China, using 3CE.

Unilever bought Carver Korea, which owns the Korean cosmetics brand AHC, for 3 trillion won last year for a similar reason. L’Oreal, which has been criticized for its relatively poor competitiveness in makeup relative to skincare, is planning to solidify its position in color cosmetics through 3CE.

The beauty industry has high expectations for growth in the Asian cosmetics market. The Asian makeup market is expected to account for more than 30 percent of the global makeup market in the future, and the Chinese market, particularly, has huge growth potential.

L’Oreal anticipates that if it sells 3CE products through its current distribution networks, it will be able to increase its influence in Asia as well as the North American and European markets.

L’Oreal’s also hopes the acquisition will help boost its brand image, as 3CE’s main customer base is Asian millennials.