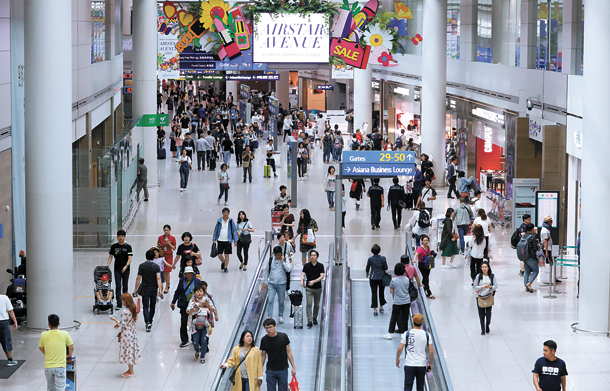 A view of Incheon International Airport’s Terminal 1 on Friday. The Korea Customs Service awarded Shinsegae Duty Free a license to run stores in the terminal’s DF1 and DF5 zones until July 2023. [YONHAP]

Shinsegae Duty Free won two licenses to operate at Incheon International Airport’s Terminal 1 on Friday, beating out Shilla Duty Free in the competitive battle for lucrative slots at one of the world’s most trafficked airports.

The Korea Customs Service said Shinsegae will be allowed to operate stores in the DF1 and DF5 zones of Terminal 1 from next month until July 2023. In total, Shinsegae now occupies four out of eight duty-free zones allocated to major conglomerates. The other four are run by Lotte Duty Free and Shilla Duty Free. Another four are reserved for smaller operators.

“DF1 and DF5 are significant spots in terms of size and items they’re allowed to sell,” said a spokesman for Incheon International Airport Corporation, which determines what types of products can be sold in each zone. “DF1 is for cosmetics and perfume, while DF5 is for leather accessories and fashion.”

The two zones combined occupy more than 8,000 square meters (86,000 square feet), nearly half of Terminal 1’s total duty-free space. Lotte Duty Free, the market leader, initially held the fort but decided to give up the license in February after failing to secure lower rent from Incheon International Airport. It later re-entered the bid after the airport offered cheaper rent. 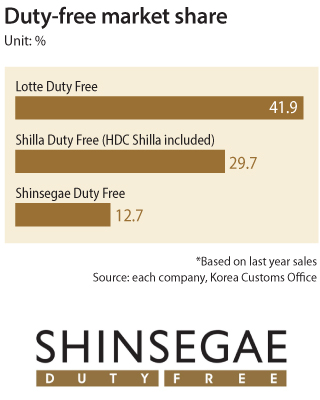 Shinsegae and Shilla were the final competitors among four bidders that submitted applications to Incheon International Airport Corporation last month. Lotte Duty Free and Doosan Duty Free were ruled out in the first round of evaluation.

Industry sources speculate that Shinsegae’s higher bidding price did the work. Among a total of 1,000 points in the customs office’s grading scale, bidding price took up 400 points. Shinsegae offered 337 billion won for the two zones, while Shilla offered 269.8 billion won.

In the duty-free industry, the bid upended a market long dominated by Lotte and Shilla. Shinsegae is a relative newcomer in the game, entering in 2012 after acquiring the duty-free business of Paradise Hotel.

Shinsegae’s bid win on Friday, though, raises its share to 19 percent, while Lotte’s falls to 36 percent because of the lost space at Incheon. Shilla’s share remains unchanged at 29.7 percent.