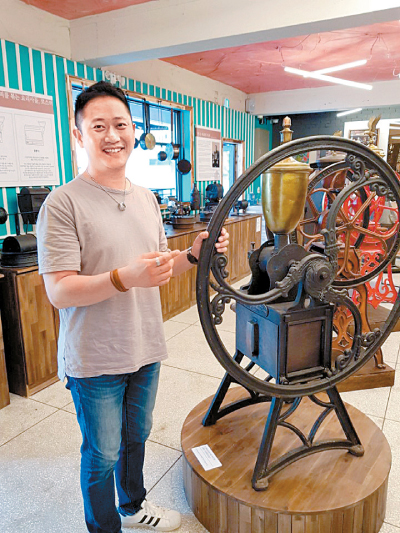 Kim Dong-kyu, curator of the Busan Coffee Museum, shows off his collection of antique equipment on Wednesday. [HWANG SUN-YOON]


Kim Dong-kyu is the curator of a museum in Busan that displays antique equipment and curios from coffee shops around the world. But he can’t drink the stuff himself.

“Not a single sip,” he said, “because of a coffee allergy.”

Yet Kim claims to be one of the world’s foremost experts on coffee history and culture. His Busan Coffee Museum, which opened on Monday in the bustling Jeonpo Cafe District, contains over 400 objects that Kim has personally collected over the years, from grinders and roasters to mugs and cooling fans — and that’s only a small part of his collection. He has over 1,000 more objects at home.

The museum’s oldest antique is a German coffee grinder from the 1700s. Another prized possession is an extra-large grinder made in Portugal in the 1850s and later sold in the United States. All of the items on display are at least 100 years old.

Kim was interested in antiques from a young age and dreamed of becoming an expert in artifacts. He studied in art in college and later acquired a certificate in curation. He started collecting and studying antiques 16 years ago.

From there, his first purchase of a small, attractive coffee grinder jumpstarted his current interest in coffee-related curios. These days, he searches online for auctions and travels outside of Korea once or twice a month to purchase antiques. He’s amassed much of his collection this way, purchasing items directly from abroad.

In his freshman year of college, Kim began working at his family’s landscaping company to fund his collecting hobby. When asked how much money he had spent over the years, he said, “Not nearly as much so that we would go bankrupt.”

“An artist doesn’t create just to sell his work,” Kim said when asked whether the museum was sustainable. “I’m not trying to make a living out of collecting. I do it just because I want to.”

At the museum, Kim personally greets visitors when he’s not helping out his family at their business.

The 165-square-meter (1,776-square-foot) space that the museum occupies on the second floor of a building was originally going to go to a restaurant. But the proprietor, Moon Jung-ho, got excited when he heard about Kim’s idea for a coffee museum.
“When I go to the office, people thank me for allowing the museum to open,” Moon said.

Coffee culture is thriving in Korea, where some streets have more cafes than restaurants. The country has one of the highest coffee consumption rates in the world.

According to data from the Ministry of Agriculture, Food and Rural Affairs, the average adult drank 377 cups of coffee per year in 2016, up from 283 in 2009.

The Port of Busan processes the second-highest volume of coffee shipments in the world, after Sydney, Australia, and there are over 10 coffee museums just like Kim’s across Korea.