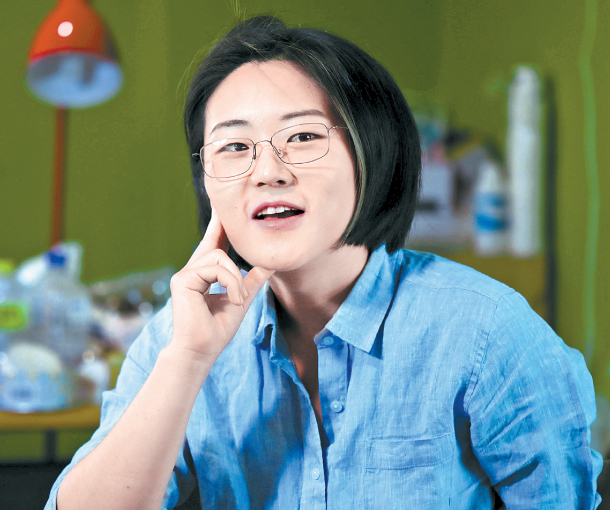 Shin Ji-ye ran for mayor of Seoul under the Green Party and was the city’s only self-proclaimed feminist candidate. [KIM kyuNG-BIN]

On June 13, as elections were taking place across the country, teenagers at the YMCA in Seoul were participating in a mock vote.

The candidates were the real-life ones for Seoul mayor — incumbent Park Won-soon, conservative challenger Kim Moon-soo and perennial also-ran Ahn Cheol-soo, among others. The voters: 45,765 Korean youths under the age of 18.

Unlike the real election, which Park won by a landslide, the winner of the mock vote was Shin Ji-ye, the only self-proclaimed feminist candidate.

Shin won 36.6 percent of the youth vote, while Park finished second. In the real election, Shin finished fourth with 1.7 percent.
The 28-year-old Green Party candidate made headlines for running under the banner of feminism and incorporating emojis into her flyers. Her overt feminist stance drew scorn in a still largely patriarchal society. Many of her posters were ripped off walls, a direct violation of election laws.

Still, Shin proved popular among the youth. In the real election, she earned 82,874 votes, mostly from Koreans in their 20s and 30s. It was a remarkable feat for a minor-party candidate of her age — and an outwardly feminist candidate no less — to receive more than 80,000 votes.

Two days after the election, Shin reflected on her campaign and the society she hopes to see in the future. Below are edited excerpts from the JoongAng Ilbo’s interview with Shin.

Q. Are you satisfied with the election result?

A. I’m not (laughs). I wish I had more time. The campaign took off a little late. If I had been able to debate on television, I maybe could have beaten Kim Moon-soo.

I joined the Green Party after the 2012 Fukushima Daiichi nuclear disaster, but I wasn’t thinking about running for office. Instead, I founded a youth start-up with some colleagues in 2013. That was more about helping the local community as young adults than about earning money.

And then you ended up running for mayor.

I was born in 1990, the year of the white horse. It was said that women born in the year of the white horse would have no respect for men, so abortions of female babies reached a high that year. No one gets to choose their sex at birth. It’s unfair that people have to face danger for factors outside their control. So I wanted to show people how their everyday lives could change if a feminist becomes mayor of Seoul. Changes in politics lead to changes in individual lives.

I’ll answer with a story. There was a big fire in a jungle. All the animals were running for their lives, but a hummingbird was carrying water back and forth to put out the fire. “Will that really change anything?” an elephant asked. “I just do what I can,” the hummingbird said. It may just be a small voice, but we need people like hummingbirds in this world.

It was difficult running under a minor party. The barrier to entry in Korean politics is very high. To register as a candidate, the fee is 50 million won ($45,000), the second highest in the world after Japan. Everyone should have the right to run in a democratic election, but the financial burden stops young people and commoners from participating in politics.

Same with televised debates. Voters should be encouraged to watch candidates debate before they are polled for their opinions, but they poll people first and only invite candidates from major parties to debate on TV.

People kept ripping down your posters. That was big news.

It was actually amusing. Some people said I looked too arrogant on the poster. I didn’t intend to look cocky. I just wanted to look confident. So it was amusing to me that certain people read that as arrogance. I think that comes from their own ideas about the way women should be, the way politics should be. On the other hand, certain generations of people were delighted by my poster. That proved to me that younger generations read politics differently, and that gave me more confidence.

You pitched yourself as “the feminist mayor of Seoul.”

I felt the city needed a new paradigm. Seoul’s economy has grown by exploiting, excluding and discriminating against certain people. Now it’s time for equality. The politicians of this era should be devoted to caring for those who have been neglected for so long, and I felt gender equality was the most pressing issue. After all, women and girls make up half the population.

Feminism comes in many forms.

Yes, but they all share the same goal: to end sexual violence, gender inequality and the patriarchy. Every ideology has more than one faction. That’s why solidarity is important. Revulsion, discrimination and loathing for no specific reason is hatred. Respecting and understanding without prejudice is love. Feminism is fighting against hatred. Love will prevail.

There is a lot of misunderstanding about feminism.

Many people seem to think feminism advocates misandry and female supremacy, but feminism doesn’t try to exclude men. It just tries to uproot gender inequality. I think everyone should be a feminist, including men.

In this election, I wanted to make a Seoul where citizens can get proper medical services even if they’re not rich, where they do not fall victim to violence or discrimination. I will continue to fight for this city. The Green Party has stood for six years without any subsidies from the government. I hope the party keeps that vitality alive to win spots in the National Assembly during the elections in 2020.