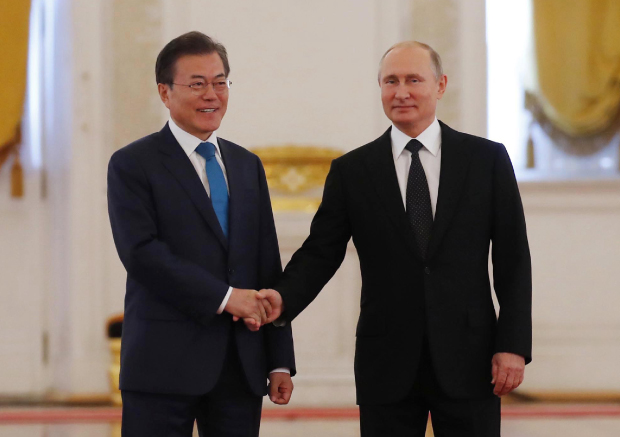 Korean President Moon Jae-in and Russian President Vladimir Putin on Friday agreed to pursue potential trilateral economic cooperation involving the two Koreas and Russia in railroads, electricity and natural gas at a summit meeting in Moscow, an economic blueprint premised on North Korea following through on its denuclearization promises.

During Moon’s third summit with Putin since he took office in May 2017, the two leaders discussed potential economic joint development that could be realized if sanctions on North Korea barring foreign investments are lifted.

“We have agreed to bolster communication and cooperation to bring peace and prosperity to the Korean Peninsula and the Eurasian continent,” said Moon at a joint press briefing following the summit meeting.

“President Putin and I have agreed to launch business projects to prepare for potential trilateral cooperation involving South, North Korea and Russia,” he continued, adding, “Launching joint research on connecting railroads, electrical grid and natural gas lines will be a starting point.”

Moon’s remarks are in line with a Blue House statement on the summit that said there was a “shared judgement” between the two leaders that “trilateral economic cooperation could ensue under the right international circumstances that could be realized with the North’s denuclearization efforts.”

Moon’s meeting with Putin came amid heightened hopes that Pyongyang would proceed with some process of denuclearization in exchange for sanctions relief and a guarantee of regime safety by the United States.

At the Kremlin summit, Putin praised Moon’s role played in two inter-Korean summits and the North-U.S. summit in recent months.

Putin said Russia would continue to work for a peaceful resolution of the North Korean nuclear issue and a permanent peace regime on the Korean Peninsula.

Moon asked Putin to visit Korea at a convenient time in the future and Putin accepted the invitation.

On the economic front, Moon and Putin affirmed that they had a common interest in developing Russia’s far-east regions by making use of the yet-to-be tapped North Korean economy.

In Moon’s New Northern Policy, the South Korean government envisions connecting railroads between the North and South and making them reach the Eurasian continent beyond the North Korean border.

In a speech to Russia’s legislative lower house, the State Duma, on his first day in Russia Thursday, he shared his New Northern Policy aimed at creating an economic region that connects Korea to the Russian Far East, Northeast Asia and eventually Europe.

“The Korean people desire peace and co-prosperity not only on the Korean Peninsula but in all of Northeast Asia,” Moon said.

It was the first time a South Korean president delivered a speech at State Duma since the two nations started diplomatic ties in 1990.

Moon and Putin also agreed to increase the volume of their countries’ annual bilateral trade to $30 billion by 2020 from last year’s $19 billion, a 41 percent on-year hike.

To that end, the two leaders signed four memorandum of understandings (MOUs) aimed at fostering economic activity between the two nations.

One MOU involved setting up economic platform centers to facilitate cooperation in the start-up sector. The second MOU involved tying South Korea’s local governments with those of Russia in its far eastern region to encourage economic, cultural and educational exchanges.

The third MOU involved cooperation in the electricity industry, a sign of the two nation’s growing interest in transporting Russian-generated electricity to North and South Korea, a scenario that requires the North’s denuclearization in advance.

The fourth MOU involved encouraging cultural exchange to commemorate the year of 2020 as the 30th year anniversary of official ties between the two. 2020 is designated as the “Year of Bilateral Exchange.”

On Saturday, the last day of Moon’s state visit — the first for a Korean president in 19 years — Moon will attend the Korean national soccer team’s second Russian World Cup match with Mexico in the southern city of Rostov-on-Don. He will return to Seoul after the match.