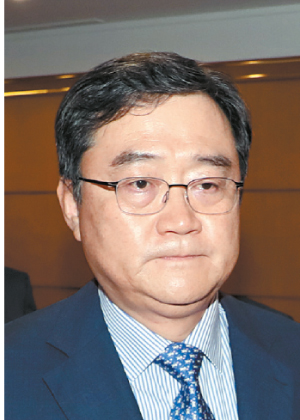 Samsung Securities will face a temporary suspension of opening new accounts and a suspension of its current CEO as a penalty for the so-called fat-finger trading error in April.

The punishment, announced late Thursday by the Financial Supervisory Service (FSS), will prohibit the brokerage from opening new accounts for six months. Besides accepting new clients, other businesses will operate as usual.

“[The FSS] decided to impose a partial business suspension for six months and fines,” the financial watchdog said in a statement, while declining to mention a specific amount for the fines.

The FSS also ordered the suspension of duties for Koo Sung-hoon, the chief executive of the company, for three months and barred three former heads including Yoon Yong-am and Kim Suk from working as an executive in other financial institutions for five years.

Koo got a more lenient penalty because the trading scandal that mistakenly ordered 2.8 billion shares in a dividend payout plan for the company’s employees took place less than a month after he took the job.

The penalties have to be confirmed by the country’s top financial regulator, the Financial Services Commission (FSC).
At 9:30 a.m. on April 6, 2.8 billion “ghost” Samsung Securities shares were placed in the accounts of 2,018 employees due to a mistake a company employee made.

The employee was supposed to transfer 1,000 won ($0.93) to each employee as a dividend payment. But in a so-called fat-finger mistake, the employee gave each fellow employee 1,000 shares of Samsung Securities.

In a preliminary investigation result in May, the FSC said that it would fine the 16 people who sold shares they shouldn’t have received because the action disturbed the market.

Analysts say the financial damage on Samsung Securities would be limited. But the rebuke will have a different kind of collateral damage: the current law bans a financial company that received regulatory penalties from entering a new business sector for three years.

“The financial effect of the business suspension would be not that substantial,” said Lee Nam-seok, analyst at KB Securities. “But the decision will limit Samsung Securities from entering a new business such as issuing promissory notes.”

Lim Hee-yeon, analyst at Shinhan Investment, echoed a similar view but held a different assessment in terms of stock price forecasts.
“Samsung Securities would find it hard to gain competitiveness in sectors like promissory notes until 2021,” the analyst said. Lim, however, raised her target price for the brokerage from 38,000 won to 42,000 won, citing the ending of regulatory actions over the fat-finger trading mistake and improvement in sales.