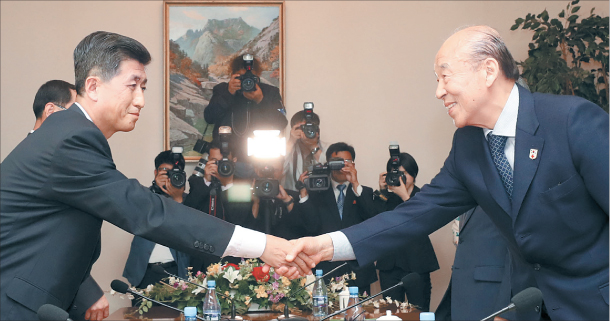 Park Kyung-seo, right, president of the Korean Red Cross, shakes hands with Pak Yong-il, vice chairman of the Committee for the Peaceful Reunification of the Country of the DPRK, on Friday at a hotel in Mount Kumgang, an iconic mountain in North Korea’s southeastern Kangwon Province, just north of the border separating the two Koreas. The two men led delegations from Seoul and Pyongyang to a meeting to discuss a reunion of families separated by the 1950-53 Korean War. [YONHAP]

South and North Korea agreed Friday to hold a reunion of families separated by the 1950-53 Korean War from Aug. 20 to 26 on Mount Kumgang, an iconic mountain just north of the inter-Korean border along the east coast.

A hundred people from each country will be selected for the reunion, and a final list of participants will be compiled by Aug. 4.
The last family reunion between the two countries was in December 2015 under the former Park Geun-hye administration.
The two countries will refurbish a building previously used to hold reunions, and the South will dispatch a team of inspectors next Wednesday to check facilities.

The agreements were reached in the latest inter-Korean talks, held Friday in a hotel at the foot of Mount Kumgang in North Korea’s southeastern Kangwon Province.

It was another follow-up to the Panmunjom Declaration signed by South Korean President Moon Jae-in and North Korean leader Kim Jong-un on April 27 in their first summit, through which both countries agreed to hold a reunion of war-torn families on Aug. 15 Liberation Day, when Korea earned independence from Japanese colonial rule.

The North’s side was led by Pak Yong-il, vice chairman of the Committee for the Peaceful Reunification of the Country of the DPRK, a cabinet-level agency that deals with inter-Korean relations, and included two members of the Central Committee of the Red Cross Society of the DPRK. DPRK is the acronym of North Korea’s official name, the Democratic People’s Republic of Korea.

It wasn’t until around 3 a.m. on Friday that the South Korean government officially announced the meeting would go as planned, after Pyongyang was said to have sent Seoul its list of delegates at 2 a.m. The North has a long history of pulling out of planned meetings at the last minute, like on May 16, when it did so for a high-level meeting that was meant to flesh out the Panmunjom Declaration.

At the time, the regime blamed Seoul’s ongoing joint military drill with Washington as an “undisguised challenge” to the Panmunjom Declaration and threatened to “indefinitely suspend” the high-level dialogue, which was ultimately back on after Kim and Moon met for a second, unannounced summit on May 26.

Seoul officials said it appeared Pyongyang had gone through some sort of administrative delay this time, denying accusations it was reacting to some sort of political issue.