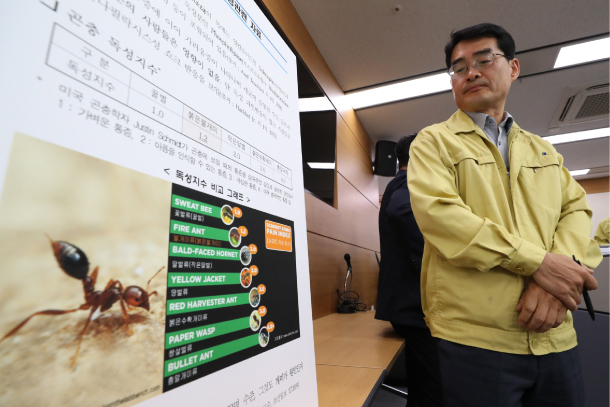 Officials from the Ministry of Agriculture, Food and Rural Affairs prepare for a briefing on Friday in Sejong to announce the discovery of over 3,000 red fire ants in Busan. [YONHAP]

The nest had over 3,000 worker ants and 150 eggs, suggesting the possible presence of a colony. It is the single largest group of red fire ants found in Korea since their first sighting in Busan last September.

The most recent discovery is especially alarming because it includes 11 winged female ants, sometimes known as “princess ants” because they can become sexually mature enough to produce colonies of their own.

Authorities believe the ants arrived from another country, most likely China, through shipping containers. The worker ants were living in 11 different anthills - each housing their own princess ant - spread across 40 meters (130 feet) in a crack on the concrete floor of a shipping container yard at the Hutchison Busan Container Terminal.

The Ministry of Agriculture, Food and Rural Affairs announced the discovery during a briefing on Friday and said it would immediately quarantine the area for further inspection and disinfection. Inspections will occur daily instead of weekly, and 32 imported products vulnerable to infestations, such as coconut peels and wood products, will be checked while still in their containers.

The government also plans to request importers from Chinese provinces with red fire ant populations to voluntarily spray their products before sending them to Korea.

The news came just days after 700 red fire ants were found in almost identical conditions at the Port of Pyeongtaek in Gyeonggi. The latest discovery in Busan is the first to provide proof that the ants have been reproducing rapidly, though no queen ant has been found yet.

Red fire ants range in size from 2 to 6 millimeters (0.07 to 0.24 inches) and are found in 26 countries. Their stings can cause a burning sensation and lead to itchy sores. People with allergic reactions to the venom can go into life-threatening shock. Over 80,000 cases of red fire ant bites are reported each year in the United States. Around 100 of them result in deaths.

The princess ants found on Wednesday were winged, indicating they might have attempted nuptial flight, the phase in the reproduction cycle where virgin queens mate with male ants in mid-flight and then land to start a new colony.

Only fecund and healthy female ants are able to reach this stage, since they have to fly up to 200 meters in the air while mating. This allows ant colonies to proliferate up to several kilometers.

The eggs produced by a queen ant after successful mating take around 30 to 40 days to hatch, and the 150 eggs found in Busan indicate that these ants have undergone at least one reproductive cycle in Korea, though the nuptial flight may have occurred in another country. Authorities said they found no traces of other colonies in the area.

Repeated discoveries of these infestations are exposing flaws in the quarantine process at shipping terminals. Officials are physically capable of inspecting only around 5 percent of all cargo containers due to the sheer volume of trade that comes through Korea and heavily rely on voluntary reporting of infestations by cargo owners.