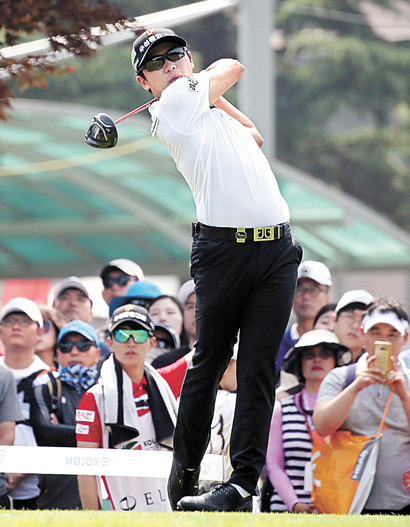 Choi Min-chul watches his shot during the final round of the Kolon Korea Open at Woojeong Hills Country Club in Cheonan, South Chungcheong, on Sunday. [NEWS1]

With four birdies and two bogeys, Choi shot two under par, 70, in the final round to finish two shots ahead of runner-up Park Sang-hyun. By finishing the first nine at even par, with a bogey and a birdie, Choi Ho-sung quickly caught up to Choi Min-chul by one shot.

But everything changed in the back nine. Choi Min-chul made back-to-back birdies on the par-4 10th and 11th holes, he quickly extended his lead by four shots.

While Choi Ho-sung fell out of contention for a win with four bogeys in the back nine, Park slowly made his way up the leaderboard in the back nine. By finishing his round with a birdie on the par-5 18th, Park shot a bogey-free round of 67, five under par, and waited in the clubhouse for Choi Min-chul to finish. However, with a 1.5-meter (4.9-foot) birdie putt on the final hole, Choi was declared a champion.

With the win, Choi took home 300 million won ($270,045) in prize money and earned a spot in The Open at Carnoustie Golf Links in July.

“Since I started playing golf, I dreamed of [playing in the] PGA Tour,” Choi said. “With a win here, I can dream of my golf life again.”

Choi, who made his KPGA Tour debut in 2011, has had a rough career and was sent back to the Tour’s qualifying school at the end of each season until 2016. It wasn’t until the end of the 2017 season that Choi made a name for himself on the Tour. Choi finished the season with three runner-up finishes and finished 12th in the final money rankings, his career high.

Despite having the best season of his career, not many people noticed Choi until this week’s Korea Open. In the third round, Choi hit a daily best round of seven under par, 64, and successfully maintained his two-shot lead to take home the trophy.

Chang Yi-keun, the defending champion, finished tied for 45th at five over par. A runner-up finish allowed Park to be the new leader in the KPGA Tour’s Player of the Year points standing.

On the KLPGA Tour, rookie Choi Hye-jin picked up her second win of the season by winning the 2018 BC Card Hankyung Ladies Cup at Island Country Club in Ansan, Gyeonggi, on Sunday.

Choi, who started the final round with a two-shot lead, shot three under par in the final round to finish the tournament at 14 under par, two shots ahead of runner-up Bae Seon-woo. Though Choi briefly lost her lead to Lee Hyo-rin on the par-5 11th by making a bogey, she didn’t wait long to get her lead back by making birdies on par-4 13th, par-3 15th and par-4 17th.

With the win, Choi took home total prize money of 140 million won and is ranked second on the Tour’s season prize money ranking.

This is Choi’s first win since the KLGPA Tour’s season opener in December 2017 and has extended her lead in the KLPGA Tour’s 2018 Rookie of the Year race, at 1,281 points.