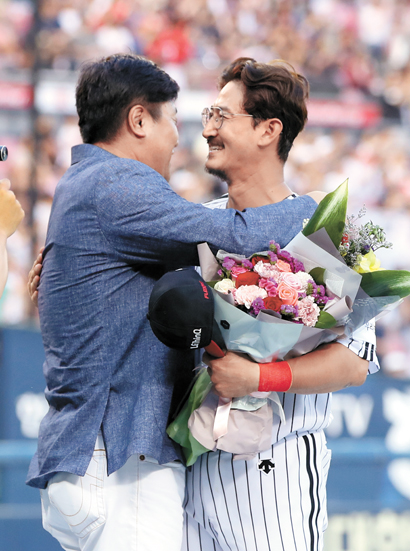 Park Yong-taik of the LG Twins set a new KBO record after notching his 2,321st career hit on Saturday against the Lotte Giants at Jamsil Baseball Stadium. The Twins won 18-8.

Park is considered one of the most consistent players in the league, and as of Saturday’s game, Park has a batting average of 0.324 with six home runs and 42 RBIs this season. In Saturday’s multi-hit game, the Twins’ designated hitter surpassed former Samsung Lions outfielder Yang Joon-hyuk’s career hit record of 2,318.

“I only thought about winning when I set the new record,” Park said. “It was a difficult game in the beginning, but our team turned it into a great game. I’ll never forget it.”

Park started Saturday’s game only two hits away from setting a new record. He got off to a quick start in the bottom of the first, when he got a two-base hit against Giants’ starter Noh Kyung-eun, after Giants’ right fielder Min Byung-hun missed the catch. After a strikeout in the third, Park had another two-base hit at the bottom of the fourth inning off of Ko Hyo-jun, this time bringing in two.

After the fourth inning, the Twins held a small celebration for Park’s record. Twins manager Ryu Joong-il, Yang and Lee Dae-ho of the Lotte Giants congratulated him, giving him a flower bouquet. The KBO announced that they will hold a separate ceremony for Park’s record at a later date.

“Since I knew that my record would eventually be broken, I can congratulate him,” Yang said. “I’m thankful that the players set me as their goal. I hope they continue to set more records.”

Now that Park has exceeded the previous record in career hits, he has set his sights on extending the number to 3,000. To achieve 3,000 hits, it will take Park about five years, assuming he is able to rack up about 150 hits per year.

“When I first said it, I think everyone thought of it as a joke,” Park said. “I think some people still think I’m joking about it, but I’m serious. I set that goal because I need to have a goal to overcome my age and my struggles.”

Park, who made his KBO debut with the LG Twins in 2002 after graduating from Korea University, had his very first hit as a professional during a game against the SK Wyverns in Incheon on April 16 that year. In September 2009, Park exceeded 1,000 career hits, and in 2016, Park achieved his 2,000th career hit.

Aside from Park’s 2008 season, he has consistently had triple-digit hit records each season. Though Park is a franchise star, it wasn’t until the 2009 season that fans really started to take notice. During the 2009 season, Park topped the league’s batting average at 0.372 - it was his first season with a batting average higher than 0.300. Since then, Park has managed to keep his batting average above 0.300 for nine straight seasons.

Park’s record is unlikely to be broken by other players for a while. Of players currently active in the league, Jeong Seong-hoon of the Kia Tigers is second in career hits with 2,140 and Park Han-yi of the Samsung Lions is third with 2,101.

In addition to Park’s 3,000 career hits, he has set another goal before retirement - a Korean Series title for the Twins.

“Throughout my 17 years [in the KBO], I think I’ve done everything except one, win,” Park said. “I never thought that I wouldn’t win the Korean Series until I’m 40. I think this is why I continue playing baseball. I’m not leaving until we win.”