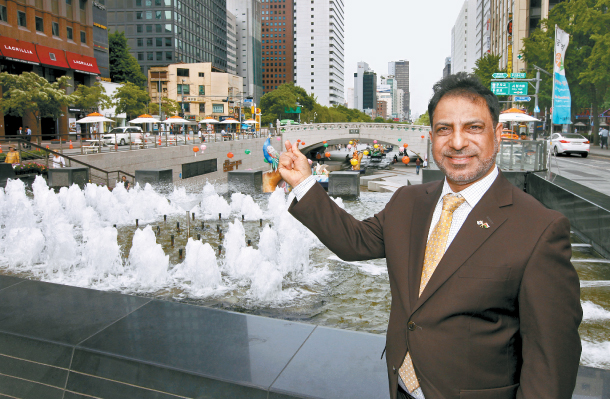 Ambassador of Oman to Korea Mohamed Salim Alharthy at the Cheonggye Plaza in central Seoul on May 15, where the Cheonggyecheon stream and the trails on either side of it begin, stretching eastward for around 6 miles. [PARK SANG-MOON]

Walking along the Cheonggyecheon, a stream that flows through central Seoul, has become something of a ritual for the ambassador of Oman when Ramadan season comes in Korea.

“It’s the meeting point among some ambassadors and friends, or with guests or families, during Ramadan, any other holiday, or just on any given day,” said Omani Ambassador to Korea Mohamed Salim Alharthy. “Then we make our way together from there to Seongbuk-dong [in central Seoul], and celebrate breaking the fast at one of our homes, often the home of the Qatari ambassador. Sometimes during holidays we walk all the way down to where the stream flows into the Han River.”

The Cheonggyecheon stream, which has existed since the early Joseon Dynasty (1392-1910), was situated near low-income areas in the 1950s and most of it was covered up in the midst of rapid development in the ’60s and ’70s. It was redeveloped in a 2003 project by former President Lee Myung-bak when he was Seoul mayor, and the city government pitched in 386.7 billion won ($350.2 million) to complete the project in 2005.

As of 2017, the stream has seen 231.5 million visitors, according to Seoul Metropolitan Facilities Management Corporation, a public corporation that manages the stream.

A frequent visitor to the stream, Ambassador Alharthy said an image of something from home comes to mind when he walks along the stream.

“Rivers and lakes may be a rarity in Oman, but we have valleys and mountains, and a very unique irrigation system that makes perfect use of the geographical feature of the country,” he said. “We have something called the Aflaj irrigation system in Oman, and there are about 3,000 of them. We use gravity to pump up underground water to irrigate farms and for domestic use.

“So I have promoted the concept of Cheonggyecheon to develop something similar in Oman,” he said. “We have so many valleys around Muscat and all over Oman, and if they can be developed into water canals with trails like the Cheonggyecheon, they may draw in more tourists into the area.”

The following is an excerpt of the interview with Ambassador Alharthy, who is entering his eighth year in Seoul and can name his top 10 places in and around the city in one breath.

From left: Examples of the Aflaj irrigation system in Oman. Embassy of Oman in Seoul, built in the architectural style commonly found in Oman. [EMBASSY OF OMAN]

Could you tell us more about the irrigation systems in Oman?

This system called Aflaj is a unique one found in the world, registered as a Unesco World Heritage. It may date back to as early as 2500 B.C., according to some archaeological evidence observed by Unesco. The canals draw water flowing from the mountains and also brought up from underground. Some of these canals continue for long distances and are divided very scientifically, sometimes for a single system to irrigate a whole village or even several villages.

Has there been bilateral cooperation on developing the canals in Oman similar to how the Cheonggyecheon stream was developed?

I have been trying to bring people in charge of city planning in Muscat municipality to visit Korea and discuss ways to bring the Cheonggyecheon concept to valleys in Oman.

I am hoping more sister-city cooperation can take place between Seoul and Muscat, Gyeongju and Nizwa, Busan and Sohar, Jeju and Musairah islands and Sokcho and Salalah.

What other areas in Oman would you like to recommend to visitors?

When you visit Muscat, you will notice that most of the buildings are low-rise and [there are] lots of forts, many of them around since the 16th century. Have a visit around the mud-brick villages and these forts. We have over 500 castles and forts that are definitely worth a visit — there is the Nizwa Fort, Jabreen Castle, Al Hazm Castle, Nakhal Fort, Barka Castle and more. In Oman, you can even witness the history of the area going back to the third millennium B.C., at the settlements of Bat, Al-Khutm and Al-Ayn, which is another Unesco World Heritage site.

The people of my country have long been traders, as the Silk Road passes through the country. And you will see traces of this in the vibrant marketplaces. The markets, or souqs, sometimes open near the forts, like the Nizwa fort, which has a popular Friday souq. There, you can witness a parade of goats and cows for bidders.

Another beautiful city is Salalah in the southern part of Oman which has cool and nice weather during summer with green mountains and waterfalls.

Definitely visit Oman for snorkeling and scuba diving — there are some great places to dive in the islands northwest of Muscat, and at Musandam, which projects into the Strait of Hormuz. There are a great many activities to do by the sea; Oman is known as the land of Sinbad the sailor. You can’t leave out boating out to the sea to sight leaping spinner dolphins or waiting by the beach in Masirah Island to witness the famous green turtles’ hatchlings making their way into the sea.

Where have been some of the more memorable places you visited here during your tenure?

You name a popular place in Korea and I have probably been there. We talked a bit about Cheonggyecheon. But when it comes to Seoul, you know that’s not all. Whenever I have a guest from Oman visiting, I tell them that they don’t need a car on the first day of their tour here, because we will be walking everywhere. We walk through the Gwanghwamun area, see the Sejong statue, go underground for the museum there, visit the Gyeongbok Palace and walk to the Insa-dong area and on the trail of Cheonggyecheon, all the way to Myeong-dong.

If they’d like to keep exploring, I take them to Bukchon and Samcheong-dong, and all the way to the Dongdaemun area. Sometimes on holidays we cross the Han River into Yeouido Park, as well as to the park near the Banpo Bridge — my family and I actually often spend weekends at the park, having a picnic by the river.

Going beyond Seoul, I’ve been to Jeju four or five times. Busan is also very convenient to visit with the KTX line. And if we’re talking about historical and cultural spots, Gyeongju, North Gyeongsang, is a place to visit. I’ve also been to Daegu and Ulsan, the fortress in Suwon, Gyeonggi, and Sokcho in Gangwon.

As soon as I walked into the embassy, there was a scent of something in the air. What was it?

What you noticed is frankincense in the air. This is what we call the symbol of hospitality in Oman — when the guests enter a home, they smell something good in the air, which is frankincense being burned in charcoal to fill up the house with the unique aroma. Frankincense in its raw form is a resin of a tree, which comes out in the Bible, too — it’s called the Boswellia sacra. There is a region in Oman called Salalah and this place produces one of the best frankincense in the world.

Once the guests sit down, we offer them dates and coffee. And upon their leaving, they are offered rosewater to wash their hands.

How did the Omani government come to build the embassy in an Islamic architectural style?

Our policy is to build embassies that reflect our unique culture and heritage. We came to build it to resemble the Arabic and Islamic architecture in Oman also because this is a historical area in Seoul, near Gyeongbok Palace, and we wanted to represent the country best in the area. At the embassy you also get to see an exhibition on Omani cultural artifacts. The building was completed in November 2011 and since then we have been receiving groups of students, at least one a month, to enhance cultural understanding between the two countries. 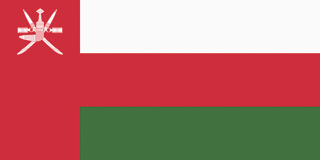 The bilateral relationship dates back a few centuries when the merchants of Oman and Korea are thought to have met on the trails of the Silk Road in Gyeongju. The two countries established diplomatic ties in 1974. Oman exports oil and liquefied natural gas to Korea and imports from Korea automobiles, vessels, electrical goods and electronics. Korean companies including GS, LG, Daewoo, Hyundai and Samsung have pitched into infrastructure projects in Oman including in building roads, ports, airports and refineries. The Embassy of Oman in Korea participates regularly in cultural festivals, and the embassy said it remains keen for further Oman–Korea cooperation.

In 1996, the government of Oman set out a plan called Vision2020, which is a long-run plan to achieve sustainable development of the country’s economy through focused growth in the ICT and IT sectors. It is a road map for Oman 2040, a strategy focusing on non-oil sectors including manufacturing, tourism, transportation, mining and fisheries as part of its economic diversification strategy.

Ambassador Mohamed Salim Alharthy came to Korea in 2010 to represent Oman as its top envoy in Seoul. He was previously the chief of the IT Department of Oman’s Ministry of Foreign Affairs. He is also the dean of the Arab Diplomatic Corps in Korea and president of the Korea Arab Society. He is also the dean of the Diplomatic Corps in Korea since last year. The ambassador is married with six children.