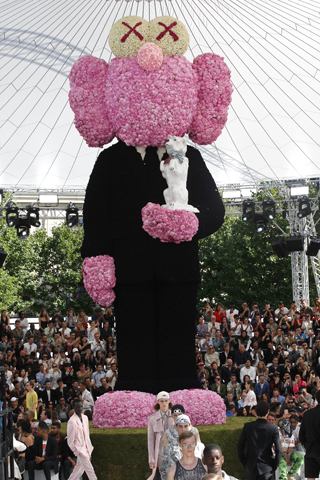 In a week marked by big debuts, it was designer Kim Jones’ turn at Dior Men on Saturday.

The British designer drew stars from the worlds of film, music and fashion to Paris for his first collection at the storied powerhouse.

Stars such as Bella Hadid, Victoria Beckham, Naomi Campbell, Robert Pattinson, Kelly Osbourne and Gwendoline Christie all marveled as the entered the historic courtyard venue in which a 20-meter (66-foot) avatar sculpture of Christian Dior made of flowers towered over guests.

Gentle pastel colors fused with flashes of cobalt blue, yellow and florals for the display that moved the Dior aesthetic in a gentler direction than that of Jones’ predecessor, Kris Van Assche, who looked on from the front row.

“Translating a quintessentially feminine couture identity into a masculine idiom results in clothes which are softer, with rounded shoulders and eased shapes,” the house explained.

There was much artistry. The house’s staple shirt was given a slashed cowl at the back, exposing the back - in a touch of cool.

Floral motifs referenced Dior’s love of flowers and a decorative landscape print cropped up in jacquards, embroideries and even in feathers. The program notes said it was a pattern used in the original 1947 boutique on Paris’ Avenue Montaigne.

The Dior suits, in cashmere and summer mohair, were double-breasted in reference to the diagonal shape of a women’s Dior jacket from 1950. But to retain the edginess, the suits were worn against a naked torso on a model in sneakers.

It was a great touch that perfectly summed up Dior’s sportswear-meets-couture style.

The sweet scents from a giant flower figure - by artist Kaws and made of pink, green and black flowers - wafted in between Dior’s celebrity guests.

The strange man - an avatar of Christian Dior clutching a perfume bottle in the shape of his dog Bobby - bowled over guests, including Kelly Osbourne.

“The set is actually incredible,” said Osbourne, craning her neck.

The 33-year-old British singer, who joined model Natalia Vodianova on the front row, said she was attending the Paris debut to support her friend Jones, whose previous job was menswear chief at Louise Vuitton.

“As a proud Brit, it just goes to show how artistically talented we all are…we’re so proud of him,” she said. “It might be the entire front row crying.” AP