[NEWS ANALYSIS] Genesis struggles to get past its growing pains

[NEWS ANALYSIS] Genesis struggles to get past its growing pains 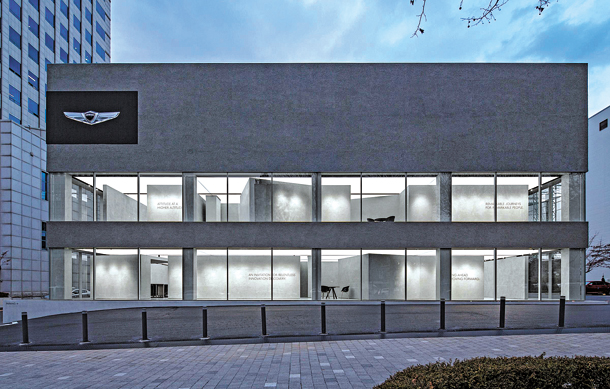 Genesis doesn’t have independent dealerships, but it has a showroom in southern Seoul called Genesis Gangnam that opened to the public in January. [HYUNDAI MOTOR]

The birth of Genesis was nothing if not ambitious.

When Hyundai Motor launched its standalone luxury brand in 2015, it recruited luminaries from some of world’s most storied automakers. It brought on Manfred Fitzgerald, the former head of Italian supercar manufacturer Lamborghini to helm the Genesis brand, and recruited Luc Donckerwolke from Bentley to lead the brand’s design department.

Hyundai, which was once known for good value above all else, was confident that Genesis could drive the company to improved profits in the future and make up for its parent brand’s weak points.

In the two and a half years since Genesis launched, the brand has struggled to find its footing.

The automaker launched the EQ900 (known as the G90 overseas) and G80 sedans, which used to be sold under the Hyundai brand, and pledged to launch a total of six models by 2020 while entering major markets such as the United States and China.

But Genesis still has not launched in China, and its next model, the GC80 coupe, might be delayed by a year to launch after 2020, according to a company official.

All of Genesis’ current models - the EQ900, G80 and G70 - are sedans, in a market that is quickly turning toward SUVs.

The situation is even worse in the United States, the only major global market that Genesis has entered.

Despite the flagging performance, Fitzgerald, senior vice president for the Genesis brand at Hyundai Motor, insisted that “being recognized as a relevant and credible brand” is still the most challenging task for Genesis in an interview at the Busan Motor Show early this month. “Awareness in markets other than the domestic market is definitely the key issue.”

Analysts have a different perspective. Genesis may face troubles as the auto industry shifts from gas and diesel-powered engines to eco-friendly technologies. 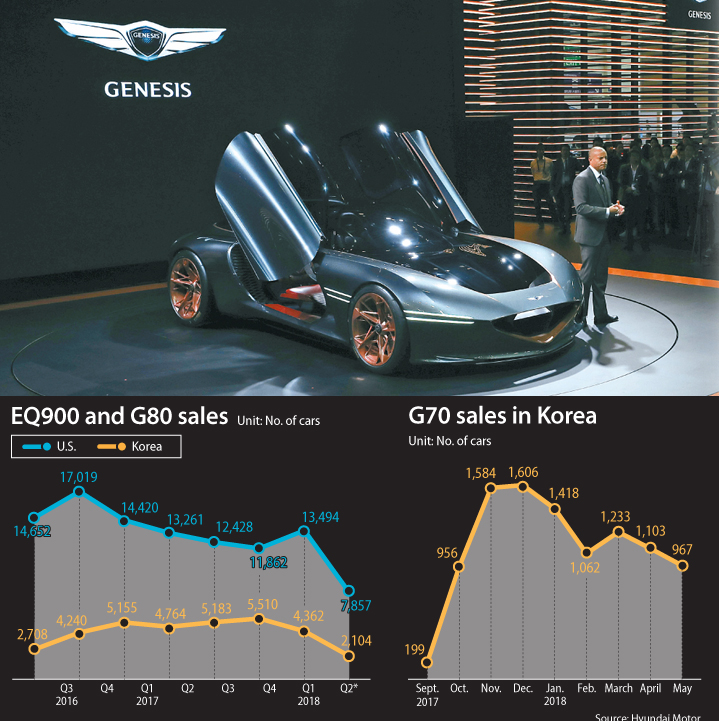 A little too late

Hyundai isn’t the first automaker once associated with cheaper cars to jump into the luxury market.

In the 1980s, Japanese automakers Honda, Toyota and Nissan, then best known for stodgy but reliable compact cars, launched an all-out attack on the American luxury market. In particular, the Lexus LS sedan, released in 1989, catapulted Toyota’s fledgling premium brand to success on par with German luxury titans like Mercedes-Benz and BMW.

Genesis’ limited success in the U.S. market may be because American consumers have already seen this story before ­- relatively unknown Asian luxury sedans - and want something new.

Genesis launched in the United States last year with its G90 and G80 sedans.

Around this time, Lexus was decreasing its emphasis on sedans after its sales dropped and switched its focus to hybrid SUVS.

Americans’ vehicle preferences have shifted from sedans to SUVs and pick-up trucks over the past few years.

Last year, sales of Lexus sedans dropped by 23.3 percent year-on-year in the United States, while those of SUV models increased by 2.9 percent.

“Premium sedans are an ancient story in the United States,” said Kim Pil-soo, an automotive engineering professor at Daelim University. “Genesis was just a step too late to jump into that premium sedan market when rivals were busy washing their hands of the diminishing segment.”

But Fitzgerald said during the interview that he was still determined to complete Genesis’ three-sedan lineup in the United States before launching its SUVs.

“It is not only about sales objects, but about creating a new brand,” he said. “Our foundation is the flagship G90 and the G80 and then you add diversities like the SUV models. We won’t chase a quick goal.”

The midsize G70 sedan is slated to hit the U.S. market in July, according to Fitzgerald.

But even when the new model launches, it is unclear whether the Genesis brand will be able to win the hearts of American drivers.

“The G70 could compensate for the negative growth in the U.S. market,” said Koh Tae-bong, a senior analyst at Hi Investment & Securities. “But the question of the model being able to tow the brand’s growth there is a different story, because sedans are not doing well. The real game will begin when the SUV lineup launches.”

The GV80 SUV will be launched in the United States in 2020 at the earliest, according to Fitzgerald.

The success of Genesis in North America is crucial for the brand, as other major markets like Europe are already dominated by the premium brands that Genesis still has to catch up to.

The G70’s launch in the United States has already been delayed from the second quarter of this year to the third quarter due to conflicts with American dealers.

“It is a pity that the Genesis had to scratch its reputation by showing continuous negative growth in the United States, when it is crucial to make a good first impression, especially for a completely unknown brand like Genesis,” said Koh.

Genesis management is also creating worries, as questions over product launch delays and why the company is not creating separate dealerships to boost its premium image continue to nag it.

According to industry insiders, Hyundai Motor made a hefty investment in its internal combustion engines, especially its diesel powertrains, in the early 2010s. At that time, German premium carmakers like Mercedes-Benz and BMW gained the attention of Korean buyers with their fuel-efficient diesel engines.

In 2015, for example, Hyundai Motor sold a whopping eight variants of its midsize Sonata sedan that were powered by internal combustion engines. Just as Hyundai Motor was finally starting to profit from its diesel, gasoline and LPG-powered models, the global paradigm swiftly changed thanks to Volkswagen’s “dieselgate” emissions-rigging.

The priorities for Hyundai Motor have now shifted to taking the upper hand in future-oriented segments such as fuel cells and electric powertrains, as well as autonomous driving technology.

In a cutthroat situation like this, investing in the fledgling Genesis brand would inevitably take a back seat.

“Aggressive investment in Genesis cannot be made in a situation like this, when the parent company Hyundai Motor is struggling to take the lead in a rapidly changing automotive market,” said Lee Ho-geun, an automotive engineering professor at Daeduk University.

“If financial investment is hard, however, there needs to be some changes, such as a dedicated after-sales center for Genesis customers, but such improvements still aren’t enough for the brand,” the professor added.

Hyundai Motor and Genesis still share the same dealership spaces in Korea as well as the same after-sales service centers.

“Korean customers are sensitive to services and experiences, especially when buying luxury products, including cars,” said Kim. “It is all about storytelling for premium car brands, but Genesis is still just an in-house name for Hyundai. It doesn’t have its own story.”

Despite these troubles, however, Genesis is still going forward - albeit with baby steps.

This month, Genesis established a dedicated team focused on entering the European market.

Although the Genesis marque may lack name recognition in America, it took the top spot in J.D. Power’s latest survey in overall initial quality, outperforming better-known brands like Porsche, BMW and Mercedes-Benz.

Genesis topped the rankings for two years in a row.

It’s also focusing on getting younger drivers into its cars.

“A lot of people thought that Genesis is a car for company executives and middle-aged men, but this trend is changing a bit now,” said Koh. “Hyundai Motor used to have similar concerns about the Grandeur, but it has attracted consumers in their 20s and 30s from the Sonata, which used to be considered a more youthful option. When people driving a Grandeur think about their next car, I think it could probably be a Genesis.”