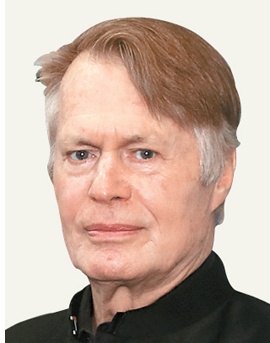 The following is an edited excerpt from “Jeju Revisited,” a contribution by French writer Jean-Marie Gustave Le Clézio to the Jeju Forum. The author of over 40 works, Le Clézio was awarded the 1963 Prix Renaudot for his novel “Le Procès-Verbal” and the 2008 Nobel Prize in Literature for his life’s work. Le Clézio was born in Nice, France, grew up in Mauritius and has traveled across the world. In 2007, he taught French language and literature at Ewha Womans University in Seoul. He recently fulfilled a lifelong dream of writing about the city, publishing “Bitna – Under the Sky of Seoul” in English and Korean last year.

More than 10 years later, I am back in Jeju. Memory needs readjusting. The island is a place for constancy, resilience, probably eternity. Jeju is also alive, and changing. What strikes me here, as in the first encounter, is the beauty — the beauty of the sea, the beauty of nature and the majestic presence of Mount Halla, one of the giant volcanoes of the Pacific. I feel something somber in that beauty, and at the same time something sweet, in the slow curve of the mountain.

I remember coming to Jeju in the winter. If you arrive from the North (from Seoul, China or Paris), you are struck by the clemency of the weather. As the plane approaches the island’s airport, you see white clouds gathered on the mountain and a mist along the seashore. Then you are surprised by the color of the sea — a dark, nearly black, blue over basaltic rocks and transparent waters along beaches illuminated by the reflection of coral. You perceive there is something different in this place, a kind of attraction and nonchalance very different from the turbulent activity of the north, the hyper-real business of Seoul and Incheon.

Then you will discover another feeling, which has to do with the drama of history, on the eastern side of the island near Seongsan Ichulbong. The long beach of black sand, the ragged rocks emerging in the white spume of the waves… Each time I come back to this place in Jeju, I feel the same feeling, a mixture of nostalgia and hope, the feeling that in some places resembling paradise, there survives a heavy past which enacts all the energy of the survivors to put away the ghosts in order not to forget but to forgive. Indeed it is not easy to belong to these shores.

Now, 10 years later, I see more clearly where Jeju stands in the future, what her role can be in a modern world sometimes so violent and unjust, stricken by poverty and fanatics. As with my island of Mauritius, Jeju’s future is the promise of her past. Looking for a safe balance, the island will be an example of tolerance and harmony, a field of experimentation for a better day-to-day life in respect of nature.

The arts and literature have an important role to play in the implementation of peace. After all, Jeju is probably the place on earth with the highest number of museums and cultural institutions per square mile! The beauty of Jeju is also linked to a spiritual quest — when magic is present everywhere, with the protection of the seodari in the falls, the protective ghosts roaming in the woods and the ancient knowledge of the spirits everywhere.

In spite of her rich heritage, Jeju is not a place for excessive recall of the days gone. It is a lively place where the present is important, a place for action and reflection. The position of this island as a stone raft in the middle of the seas, between the sea of the east and the Pacific Ocean, close to Japan and not far from China, gives her a lot of possibilities. In the difficult politics of today, as tensions between North and South seem without solution, Jeju offers a place for mediation.

After achieving independence from Great Britain, the island of Mauritius became a refuge for peace and the practice of intercultural exchange. Against the extensive power of India, America and Europe, it became a symbol of the ideal of denuclearization and a leader in the treaty concerning the regional of atomic armament. This can also be the role of Jeju Island in this part of the Pacific Ocean, offering a perfect neutral terrain for future peace treaties and a ban on nuclear weapons. Let us wish that the followers of the olle paths, the ancient wisdom of the haenyo and the inventive spirit of the youth of Jeju can one day make this dream a reality.