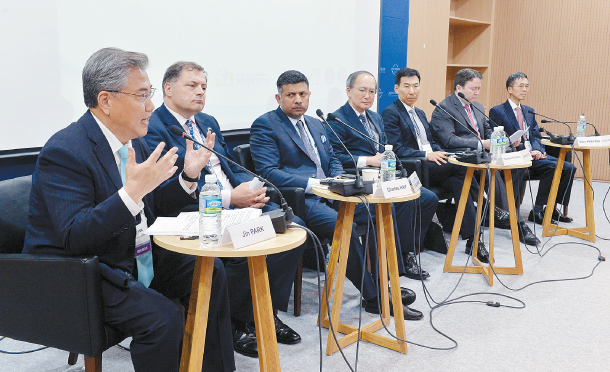 Diplomats speak at the Ambassadors’ Roundtable at the 2017 Jeju Forum. [Jeju Forum]

On the heels of the historic inter-Korean summit and the first U.S.-North Korea summit earlier this month, a group of diplomats, in the spirit of the momentum of dialogue, will discuss the path toward denuclearization and a permanent peace arrangement during the Ambassadors’ Roundtable at this year’s Jeju Forum.

Envoys from six countries will take part in the annual Ambassadors’ Roundtable at the Jeju Forum for Peace and Prosperity 2018, with the theme of “Diplomacy in Building a Peace Regime on the Korean Peninsula.”

South Korean Vice Minister of Foreign Affairs Cho Hyun will make a keynote address at the session to review the current security situation on the Korean Peninsula and how key countries helped contribute to the current trajectory of dialogue with Pyongyang.

The inter-Korean summit was held at the end of April, followed by the first U.S.-North Korea summit earlier this month, setting track a strategy toward bringing about denuclearization and peaceful coexistence on the Korean Peninsula. The landmark, first summit between North Korea and the United States that took place on June 12 in Singapore is anticipated to pave the way to some sort of “big deal” on the denuclearization of North Korea.

The joint statement signed by U.S. President Donald Trump and North Korean leader Kim Jong-un states that they will “join their efforts to build a lasting and stable peace regime on the Korean Peninsula.”

Thus, the role of diplomacy will play an especially vital role in the coming months as the inter-Korean dialogue expands to include other nations involved in the six-party talks and those countries with interest in the Northeast Asian region.

The session, organized by the Jeju Peace Institute and the Korea JoongAng Daily, will be held on Thursday, June 28, from 9:00 a.m. to 10:30 a.m. at Halla Hall in the ICC Jeju. This session will provide a venue for ambassadors to weigh in on how the international community can contribute to the establishment of peace and stability in the Northeast Asian region.