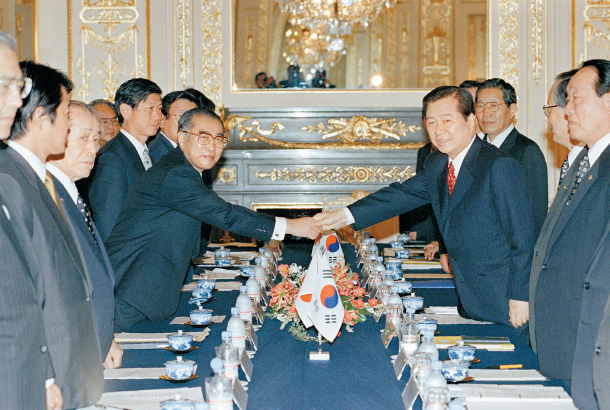 This year marks the 20th anniversary of the landmark declaration signed between South Korean President Kim Dae-jung and Japanese Prime Minister Keizo Obuchi, and the 2018 Jeju Forum will hold a special session on how to develop future-oriented bilateral relations based on this milestone agreement.

“The 20th Anniversary of Korea-Japan Joint Declaration: A New Korea-Japan Partnership towards the 21st Century,” a two-part special session, is scheduled for June 27. They will deal with general aspects of bilateral relations and cultural exchanges.

Then President Kim made a state visit to Japan in October 1998, and held a summit with Prime Minister Obuchi, producing a joint declaration seen as a breakthrough in bilateral ties as the two countries’ relations have often been marred by historical issues stemming back to Japan’s colonial rule of Korea.

The two leaders signed “A New Japan-Republic of Korea Partnership towards the 21st Century” joint declaration on Oct. 8, 1998.
In the Korea-Japan Joint Declaration, Obuchi said “in a spirit of humility” that Japan in the past caused “tremendous damage and suffering to the people of the Republic of Korea through its colonial rule” and expressed his “deep remorse and heartfelt apology.” In turn, Kim called for the two countries to “overcome their unfortunate history and build a future-oriented relationship based on reconciliation as well as good-neighborly and friendly cooperation.”

The first part of the special session remembering the Kim-Obuchi declaration is “How to Promote Korea-Japan Cooperation” and will be held from 1:30 p.m. to 3:00 p.m. on June 27. Speakers will include lawmakers of the two countries including Kang Chang-il, head of the Korean delegation to the Korea-Japan Parliamentarians’ Union, and his Japanese counterpart Fukushiro Nukaga of the ruling Liberal Democratic Party, who is a former finance minister. Professor Park Myung-lim, director of the Kim Dae-jung Presidential Library at Yonsei University, will give a keynote speech, and the lawmakers of the Korea-Japan and Japan-Korea Parliamentarians’ Union will discuss concrete measures to reestablish and institutionalize cooperative ties.

The second part of the session, “How to Promote Cultural Exchanges between Korea and Japan,” will be held from 3:20 p.m. to 4:50 p.m. It will be led by Chung Ku-chong, chairman of the Korea-Japan Cultural Exchange Council, and participants will include Shin Kak-soo, former Korean ambassador to Japan, and Kyoto University Prof. Ogura Kizo.

The Jeju Forum is also a venue that promotes people-to-people exchanges, and a Japanese delegation of students and entrepreneurs are expected to take part in sessions geared toward handling aspects of bilateral relations.

“There was a period when Korea-Japan relations were difficult, but amid a boom in the creation of an environment of peace on the Korean Peninsula, there seems to be a change in how Japanese people are viewing the Korean Peninsula, along with growing expectations and a trend toward improvement of our bilateral relations,” said Cho Woo-jin, a professor at Tama University’s School of Management and Information Sciences. He added that there are “high expectations” for this year’s Jeju Forum, pointing to an increased number of sessions focusing on Korea-Japan relations.

The university, located in the city of Tama near Tokyo, was founded in 1989, and is currently headed by Jitsuro Terashima, a former chairman of the Japan Research Institute.

Tama University students can earn credit from taking part in the forum and writing a report on it afterward, as the school has encouraged active learning.

“Japan as a country has until now looked to the West for prosperity, but now, it is the era of Asia, so it is important for Japan to look at Asia,” he said.

“The other aspect is that there are many entrepreneurs interested in Korea and Asia, so Koreans, Japanese and Chinese are joining in a session on finance and management for exchange of information and dissemination of information and to study what is going on in the region,” Cho added. He will moderate a networking session titled “A philosophical leader makes a successful company,” along with a Korea-Japan Youth Roundtable.

“Ever since I attended the Jeju Forum six years ago, I began having an interest in Korean history and culture,” said Miyuki Urano, a Japanese participant who first attended the Jeju Forum in 2012. “It became a pivotal changing point in how I view life. I began to think deeply about peace and the future development of Northeast Asia.”

She added, “As the Kim-Obuchi Korea-Japan partnership declaration marks its 20th anniversary this year, I believe this is a meaningful opportunity to reflect on Korea-Japan relations.”