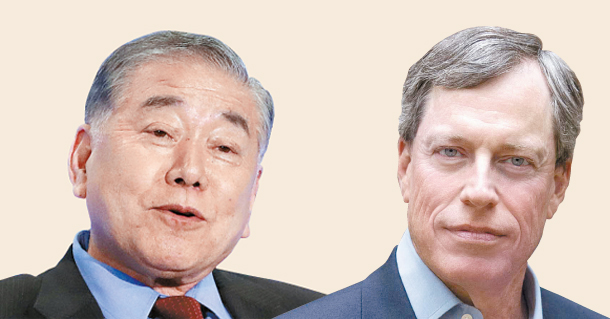 Moon Chung-in, special adviser for unification, diplomacy and national security affairs for South Korean President Moon Jae-in, and Philip D. Zelikow, a former American diplomat and director of the University of Virginia’s Miller Center of Public Affairs, will hold a dialogue on strategies for creating a peace regime on the Korean Peninsula following key summits in April and June with North Korea.

The two academics will lead a dialogue called “Creating a Peace Regime in Korea: Dialogue between the United States and Republic of Korea” on June 27 from 8:20 p.m. to 9:20 p.m. at the Halla Hall at the ICC Jeju. Ning Fukui, the Chinese Foreign Ministry’s deputy special representative for Korean affairs, will also take part in the session hosted by the Jeju Peace Institute.

Zelikow, a White Burkett Miller professor of history at the University of Virginia and executive director of the 9/11 Commission, was involved in the diplomacy surrounding German unification during the end of the Cold War as he served as a White House National Security Council staffer during the George H. W. Bush administration.

Moon is a distinguished professor emeritus at Yonsei University, who has served as an adviser during the Kim Dae-jung and Roh Moo-hyun administrations and has been a longtime proponent of engagement with North Korea.

During the George W. Bush administration, Zelikow drafted U.S. policy toward North Korea, which envisioned converting the armistice agreement to a formal peace treaty to end the 1950-53 Korean War to ultimately pursue a lasting peace on the Korean Peninsula. This initiative was endorsed by U.S. Secretary of State Condoleezza Rice.

Moon has sometimes made controversial statements, such as suggesting that if a peace treaty is signed, it will be difficult to justify the continued presence of U.S. troops on the Korean Peninsula.

He has lauded the summit between North Korean leader Kim Jong-un and U.S. President Donald Trump in Singapore on June 12 as being a “win-win,” with the United States getting the North’s commitment to “complete denuclearization” and Pyongyang getting assurance of a security guarantee and a new relationship.

In an opinion piece published by Foreign Affairs on June 19, Moon wrote that South Korea also benefited from the June 12 summit because the Singapore declaration reaffirmed the April 29 inter-Korean Panmunjom Declaration on denuclearization and the building of a peace regime.

China’s proposal for a “double suspension” of both North Korea’s nuclear and missile activities and U.S. military exercises with South Korea and a dual-track approach to denuclearization and a peace regime were likewise reflected in the summit, he added.
Moon added that Seoul, Washington and Pyongyang “have a common understanding” that the term “complete denuclearization” is synonymous with CVID, or complete, verifiable and irreversible denuclearization.

He continued, “In short, there were no losers in Singapore, which is quite an accomplishment.”