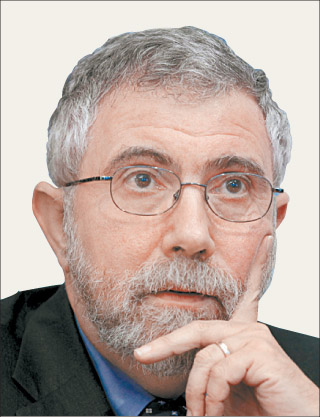 Nobel Prize-winning economist Paul Krugman will be speaking at the 13th Jeju Forum on Peace and Prosperity on the risks of a global trade war and its impact on the security environment in East Asia.

“And if we are heading for a full-blown trade war, which seems increasingly likely, both [U.S. President Donald Trump] and those who voted for him will be shocked at how it goes,” Krugman wrote in a column in the New York Times this month. “Some industries will gain, but millions of workers will be displaced.”

At the plenary session at 9:00 a.m. Wednesday at the Tamna Hall A of the International Convention Center Jeju, Krugman will be speaking about the state of the integrated global economy and low tariffs achieved through international cooperation, and the risks of a global trade war.

Krugman, an op-ed columnist for the New York Times, teaches economics and international affairs at Princeton University and the London School of Economics. He was awarded the Sveriges Riksbank Prize in Economic Sciences in Memory of Alfred Nobel in 2008 “for his analysis of trade patterns and location of economic activity” according to the awarding committee and for integrating the fields of international trade research and economic geography.

He was also awarded the John Bates Clark Medal in 1992, which is given biannually by the American Economic Association to the top economist under 40. Born in New York in 1953, Krugman earned his bachelors in economics from Yale University in 1974 and a doctorate from the Massachusetts Institute of Technology in 1977. Prior to contributing regularly to the New York Times from 1999, Krugman wrote articles in The New Republic, Foreign Policy, Newsweek, and The New York Times Magazine.

Before he joined the Princeton faculty from 2000, Krugman also taught at MIT, Yale and Stanford University. From 1982 to 1983, Krugman was a senior international economist at the Council of Economic Advisers at the Ronald Reagan White House.

Author or editor of more than 20 books and 200 articles, Krugman’s latest book, “End this Depression Now!” was published in 2012. He lives in the Princeton area with his wife.