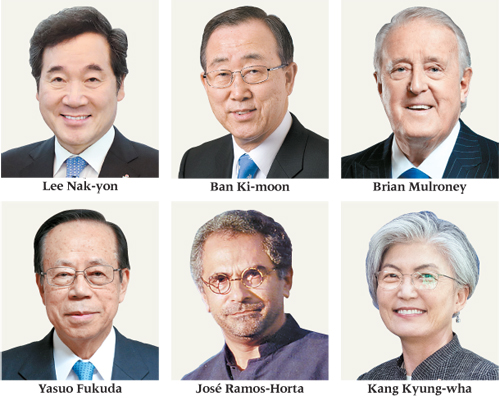 Amid rapidly shifting regional dynamics following key breakthroughs paving the way to a permanent peace regime on the Korean Peninsula, some 5,500 people from 70 countries will gather this week for the 13th Jeju Forum for Peace and Prosperity, to discuss this year’s theme, “Reengineering Peace for Asia.”

World leaders, Nobel laureates, diplomats, lawmakers, scholars, heads of international organizations, business professionals, students and media from across the globe will take part in the three-day Jeju Forum 2018, which kicks off on June 26, to share ideas about peace and prosperity in Asia at the International Convention Center Jeju in Seogwipo.

The scenic Jeju Island, a UNESCO heritage site located in the center of Northeast Asia, was also designated the “Island of World Peace” by the Korean government in 2005.

The forum was first launched in 2001 to commemorate the one-year anniversary of the historic first inter-Korean summit in June 2000, between South Korean President Kim Dae-jung and North Korean leader Kim Jong-il, with the vision of searching for ways to achieve sustainable peace and common prosperity in the ever-dynamic region of Asia.

Former South Korean President Roh Moo-hyun took part in the forum in 2007, a year after the second inter-Korean summit, launching an effort to adopt the “Jeju Process,” modeled after the Helsinki Process, for regional cooperation on peace.
The forum was held every two years until 2011 and has been held annually since 2012.

Now, in its 13th iteration, the Jeju Forum, which has been dubbed the “Korean Davos,” will have some 70 sessions covering areas that include foreign affairs and security; economy and finance; environment and climate change; gender issues, education and culture.
More broadly, the sessions are divided into five categories: peace, prosperity, sustainability, diversity and global Jeju.

This year’s summit comes at a timely moment following two inter-Korean summits in April and May and the first-ever summit between North Korea and the United States in Singapore on June 12.

Amid this movement toward forging a permanent peace regime on the Korean Peninsula and in Northeast Asia, the forum will tackle the theme of how to reengineer peace for Asia and energize the process toward peace and prosperity in the region.

The forum is co-hosted by the Jeju Special Self-Governing Province, the International Peace Foundation, the East Asia Foundation and the JoongAng Ilbo.

It is sponsored by the Ministry of Foreign Affairs and the Jeju Free International City Development Center and organized by the Jeju Peace Institute.

“The Jeju Forum is a public forum, which means anyone can take part,” said Suh. “This is really a forum that can be flexible and focus on various topics from year to year depending on what is a rising issue in the region.”

The opening ceremony of the forum is scheduled to begin 10:20 a.m. in Tamna A Hall at the ICC Jeju on June 27.

The World Leaders’ Session will take place in the same room immediately after from 11 a.m. to 12:30 p.m. as global opinion leaders tackle the theme of “Reengineering Peace for Asia” and discuss non-traditional security challenges of Asia.