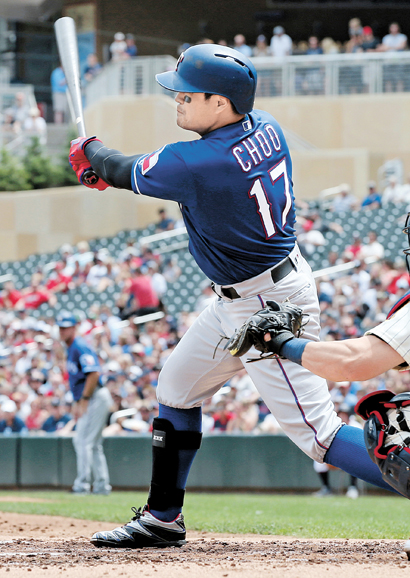 Choo Shin-soo of the Texas Rangers swings his bat during a game against the Minnesota Twins at Target Field in Minneapolis on Saturday. [AP/YONHAP]

Batting leadoff and playing left field, Choo went 1-for-3 with a walk in the Rangers’ 2-0 loss to the Minnesota Twins at Target Field in Minneapolis on Sunday.

Choo has reached base in every game since May 13. It’s the longest active streak in Major League Baseball and the longest of Choo’s career.

Among active players, Joey Votto of the Cincinnati Reds owns the record with a 48-game streak from the 2015 season.

Choo took care of his streak in the top of the first inning, with a double to center field off Minnesota starter Jose Berrios. He then drew a walk in the third inning. It was his 52nd free pass of the season, which puts him in third place in the American League.

Choo was retired over his next two at-bats and is now batting .280 for the season. He is sixth in the American League with a .393 on-base percentage, aided by a .469 mark in June.

The Rangers managed just three hits in the loss, which snapped their winning streak at seven.

Meanwhile on the West Coast, Oh Seung-hwan of the Toronto Blue Jays also had a great game, adding a perfect inning of work to his solid season.

Oh tossed one clean inning out of the bullpen against the Los Angeles Angels at Angel Stadium in Anaheim, California, on Sunday. The right-handed pitcher preserved a 5-3 lead in the seventh inning, and the Jays went on to take the game 7-6 in extra innings.

This was Oh’s third appearance in the four-game series. He had struck out the side in each of his past two outings on Thursday and Saturday, though he gave up a solo home run in the latter. That homer ended a string of scoreless appearances at seven games for Oh, but he bounced back in Sunday’s game.

He struck out Chris Young with a 1-2 cutter to open the frame. Oh then got Ian Kinsler to fly out to center and induced a soft grounder to second base off the bat of Mike Trout, the best player in baseball, who was mostly kept in check by the Blue Jays pitching in this series. The perennial MVP candidate went just 2-for-14 with no home runs or RBIs and seven strikeouts.

In three innings against the Angels, Oh had seven strikeouts against one home run and no walk. For the season, Oh’s ERA went down from 3.41 to 3.31. He has 40 strikeouts in 35 1/3 innings.

The Jays added a run in the top eighth to take a 6-3 lead, but the Angels rallied with three runs in the bottom eighth to pull even.

The Jays regained their lead in the top of the 10th with Kendrys Morales’ solo shot and hung on to win 7-6.