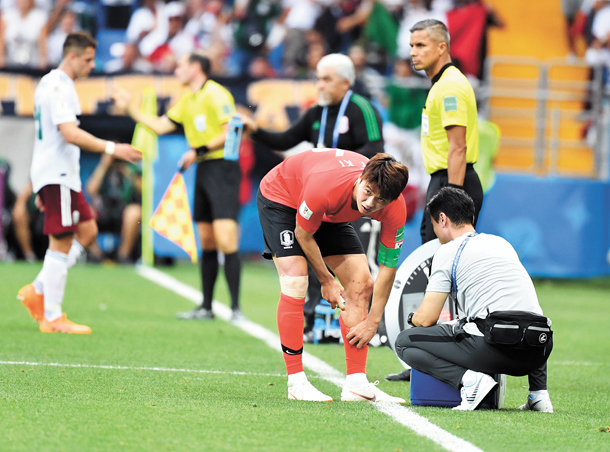 Head coach Shin Tae-yong faces another challenge ahead of Korea’s final group match against defending World Cup champion Germany, as the team’s captain Ki Sung-yueng will not be competing due to a calf injury.

Since Korea lost first two group matches, against Sweden and Mexico, the team is determined to put up a good fight against Die Mannschaft to avoid a winless World Cup. Not only that, if Korea is able to beat Germany by two or more goals, the team still has a slim chance of advancing to the round of 16, if Mexico tops Sweden.

However, it won’t be an easy match. Not only is Korea missing its key player, Ki, since Germany lost its first match 2-1 to Mexico, they won’t play an easy match against Korea to jeopardize their advancement onto the round of 16.

Ki is considered the team’s most influential player on and off the field. Ki has the most experience on the national team and has shown to be adept at passing and reading the flow of the match.

Lee Young-pyo, a former national team player who is now a commentator for KBS, pointed out Ki’s important role on the national team.

Injuries have been a constant struggle for Shin, as the majority of the players he wanted for the team weren’t able to compete at this year’s World Cup. Ki’s role on the team became more important after players like Kwon Chang-hoon, Lee Keun-ho, Yeom Ki-hun, Kim Jin-su had to skip the World Cup due to injury.

Though Jang Hyun-soo is the team’s sub-captain, it is uncertain whether Shin will put Jang in the lineup, as he made many errors in the first two matches.

Koo Ja-cheol is another candidate to replace Ki, as he served as the national team’s captain during the 2012 London Olympics and at the 2014 World Cup in Brazil.

“Ki Sung-yueng’s absence is a big loss to the national team,” said Shin. “I’ll have to think about his replacement with the coaching staff before our match against Germany.”