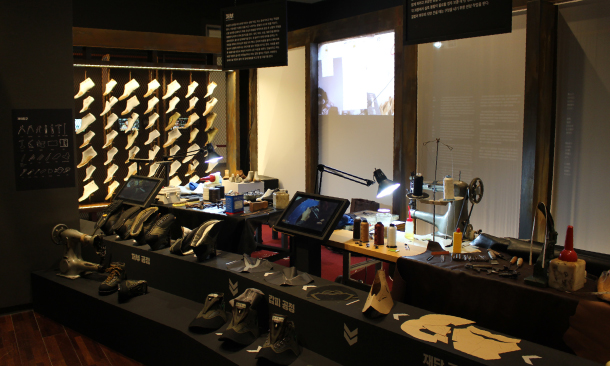 A display shows a replicated shoemaking workshop of Songlim Handmade Shoes, a shoemaking company in business since 1936. [NATIONAL FOLK MUSEUM OF KOREA]

Today, shoes are mass produced in sweatshops or factories around the world and sold for low prices. Yet, in the neighborhoods of central Seoul, a handful of shoemakers are safeguarding one of the city’s oldest crafts. The National Folk Museum of Korea in central Seoul kicked off an exhibition titled “Beyond Generations - Handmade Shoemakers” on June 20, which shows that handmade leather shoes have long had a place in modern Korean history.

While the Joseon Dynasty (1392-1910) was slow to open its doors to foreigners, late 19th century Koreans were sensitive to fashion, and were quick to adapt new foreign styles. The exhibition displays a photograph of King Gojong (1852-1919) sporting leather shoes that look similar to those seen in a French magazine published around the same time. Even in a Western catalog on display, a Korean family decked out in hanbok (traditional Korean clothing) is shown wearing leather shoes.

Korean shoemakers have reflected some of the most dramatic eras of modern Korean history in their craft. The Korean word for leather shoes, gudu, comes from the Japanese word kustu, simply meaning shoes. It is not surprising then that the first generation of shoemakers mostly learned their craft from the Japanese, and the first Korean leather shoes were made from surplus Japanese combat boots. Korean hiking boots were first made from scavenged American combat boots from the Korean War (1950-1953).

Despite the hardships, enterprising and fashion-savvy Korean shoemakers quickly made a name for themselves. The exhibition emphasizes the unique prestige Korean shoemakers held throughout the 20th century. Even in Japan, a nation that traditionally respects artisans, shoemakers were looked down upon, while their Korean counterparts were paid more than county officials. 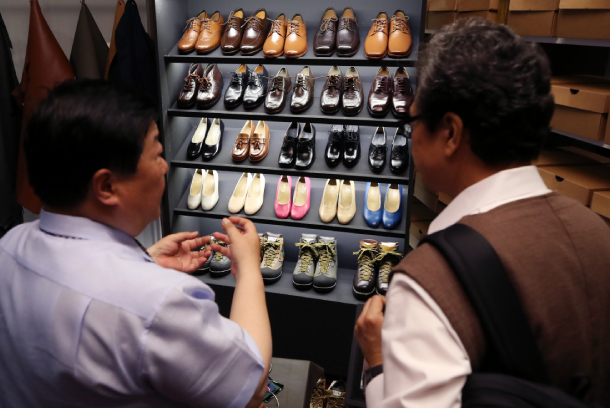 The exhibition particularly focuses on Songlim Handmade Shoes, a shoemaking company famous for making custom hiking boots since its founding in 1936. Their clients include former president Kim Young-sam and professional hiker Heo Young-ho, who has reached the peak of Mount Everest numerous times while wearing Songlim boots. An old check on display shows a contract signed between the company and the Ministry of Defense for ski boots made for Korea’s first ski troops.

To maintain their reputation as master craftsmen, shoemakers know they cannot dwell on their former glory. Quality comes above all else to satisfy their diverse range of clients. A cupboard-like partition is set up in the center of the exhibition, filled with dozens of shoeboxes and shoe molds for Songlim Handmade Shoes’ former clients. On weekends, craftsmen from the company will demonstrate the shoemaking process.

The exhibition runs until Oct. 15.