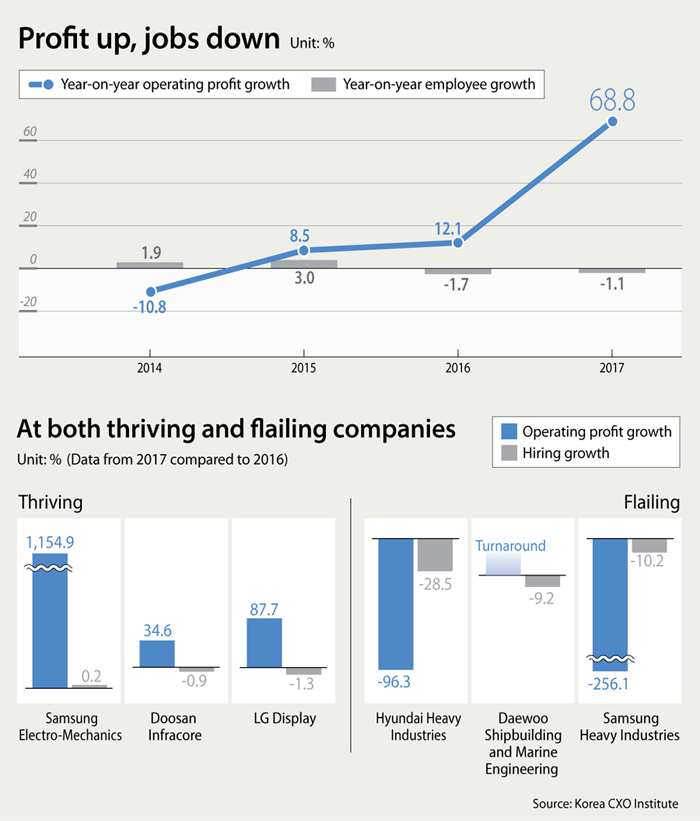 Kumho Petrochemical saw its net profit more than double last year to 213.3 billion won ($191.1 million). But over the same period, the number of its work force fell by 28.

Factory automation allows it to do more with a smaller number of workers.

A joint investigation of financial statements of Korea’s top 100 companies by the JoongAng Ilbo and Korea CXO Institute showed a trend that would have been impossible in the past: corporations steaming ahead but without hiring more people. Taken together, the 100 companies posted average revenue growth of 4.9 percent and 80.8 percent growth in operating profit - but their work forces fell 2.7 percent over the past two years, the research found.

Even when Samsung Electronics and SK Hynix, the two top semiconductor producers that enjoyed unprecedented earnings results, are excluded, 98 companies had their operating profit rise 10.2 percent on average but saw 1.3 percent fewer employees in the same period.

Under normal circumstances, the higher the revenue, the more workers are needed at companies. But 23,000 jobs disappeared at the top 100 firms over two years.

And now those companies are showing signs of earnings decline. Korea’s industrial production fell 1.2 percent month-on-month in March, the largest decrease in 26 months. The average factory operation rate of 70.3 percent was the lowest since 69.9 percent in March 2009. Those numbers indicate that companies may hire even fewer employees in the near term.

“Most of the top 100 companies in Korea are manufacturers and they have no choice but to beef up efficiency to compete against each other,” said Kang Sung-jin, professor of economics at Korea University.

That means rises in revenue and operating profits and reductions in work forces are two sides of the same coin.

Some analysts say more focus should be put on advancement in technology.

“As technologies progress, the age has arrived in which the vacancies left by retirees aren’t fully replaced by new hires,” said Park Sang-ook, a professor of industrial policy at the School of Earth and Environmental Sciences at Seoul National University. “Such a trend will gather momentum over time.”

“Intensified competition spurred by information technologies in the 2000s created this tendency globally among manufacturers to reduce fixed costs, including labor costs, and retain more assets,” said Wi Jong-hyun, a professor of business administration at Chung-Ang University. “What’s happening in Korea is also seen in Japan and the United States.”

Sung Tae-yoon, a professor of economics at Yonsei University, says artificially increasing the number of corporate workers is neither possible nor sustainable. An increase in the number of companies would be the solution to the unemployment issue, he claimed.

“If more companies with growth fundamentals are established, hires nationwide will inevitably grow,” he said. But what’s needed isn’t financial support from the government, he noted.

“The government should back up corporations with a flexible employment structure and deregulation,” he said.

“If growth at the top 100 companies is outsourced more, that will raise the number of jobs at affiliated companies,” said Cho Dong-geun, a professor of economics at Myungji University, “which will ultimately lead to a virtuous cycle across the national economy. Large companies may consider more partnerships with start-ups for technologies to revitalize the industrial platform.”

Korea should move away from its industrial structure centered around manufacturing and the government should come up with wise policy countermeasures, professor Kang of Korea Univeristy advised.

“Unlike manufacturing, services, which have yet to be exposed to global competition, still have a lot of room for more hires,” he said. “The government should ease regulations to create more jobs in the services industry.”

Services are known to create about twice the number of jobs that manufacturing can. But a bill promoting services has been stuck at the National Assembly.

Some say Korea needs to come up with sophisticated reshoring tactics that could bring manufacturing and services back to the local market from overseas.

Both Japan and the United States have common policies: tax benefits, deregulation and flexible labor markets. Those incentives are more than enough to make up for the hefty labor fees at home.

The United States made 170,100 more jobs last year through its reshoring policy and direct foreign investment, according to Reshoring Initiative, a non-profit organization. That is a reversed situation from between 2000 and 2003, when 240,000 jobs went overseas.

The number of manufacturing workers in the United States rose from 14.08 million in 2010 to 15.51 million as of the end of March, and over the same time the unemployment rate fell from 9.6 percent to 4.1 percent.

The Shinzo Abe administration in Japan also reduced its corporate tax rate and eased regulations on companies operating in large cities such as Tokyo and Osaka.

A U-turn among carmakers and electronic manufacturers had an instant effect on jobs. The employment rate among high school graduates in March 2017 was 100 percent and the figure for university graduates stood at 97.6 percent, both the highest since 1997, when the statistics were first compiled in their current form.

Korea has been taking the opposite strategy. According to the Korea Economic Research Institute, local manufacturers invested 90 percent more on overseas markets between 2005 and 2015 and what they spent on upgrading local facilities fell by 48 percent over the same time span.