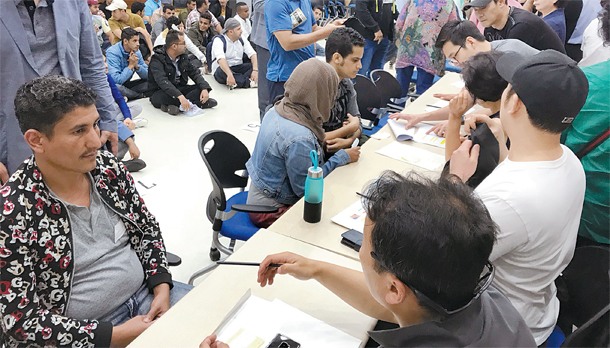 Yemenis who landed on Jeju Island apply for the refugee registration to get refugee status at the Jeju Immigration Office on Sunday. [CHOI CHOONG-IL]

Hundreds of Yemenis are trying to find jobs on the island of Jeju, where they have gained temporary stays as they apply for asylum seeker status.

“I came to Jeju on May 18 after staying in Malaysia,” a Yemeni who goes by the name Wael told the JoongAng Ilbo on Sunday. He is staying at a hotel housing some 30 Yemenis in Jeju City. His room, meant to be used by two, is being used by five.

“The hotel has been kind to us in giving a discount,” Wael said. “But because none of us have jobs yet, I’m not sure how we will make ends meet.”

“I have been trying to go back home,” said a 27-year-old Yemeni named Rafai. “But the civil war prevents my returning home. I am healthy and strong so I can do well in whatever jobs are given me here. I’ve been eating just one meal a day because I ran out of my savings. I really need a job.”

A total of 561 Yemenis arrived on Jeju Island this year without visas, of whom 549 have applied for asylum.

Normally, asylum seekers can work in Korea only six months after they submit their applications. But to address livelihood issues among some 500 Yemenis in Jeju, the provincial government allowed them to take jobs prior to the six-month mark and introduced them to potential workplaces, such as local restaurants.

The local immigration office on June 14 hosted a meeting between local fishermen and Yemenis on the island to help them find jobs on fishing boats. The office hosted another job fair on Saturday where restaurant managers and Yemenis were invited.

“We found a restaurant manager who may let us work together at the restaurant,” said a 26-year-old Yemeni named Asaq, who came to the island last April with her husband.

The immigration office in Jeju recently hired one more officer for refugee status determination, bringing the total number of such officers to three.

Each officer interviews an applicant one on one and decides whether they were indeed forced to flee their country because of persecution, war or violence. The office said it will be employing more officials for Arabic translation and interpretation.

“I will ask President Moon Jae-in for a swift yet accurate refugee status determination process for the Yemenis in Jeju,” Jeju Gov. Won Hee-ryong said at the island’s immigration office on Sunday. “The Jeju government will cooperate to minimize the concerns of the people of the island and Korea at large.”

Given that the asylum deliberation process may take months or even years, some locals have raised concern about the number of asylum seekers in the country. 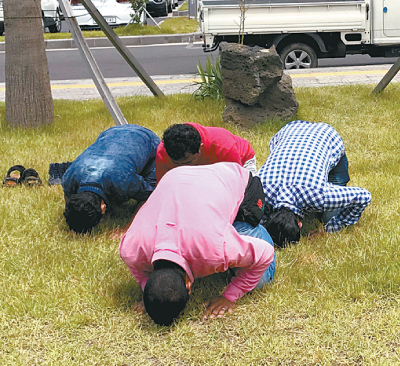 Some Yemeni refugees pray at the yard of the Jeju Immigration Office on Sunday. [CHOI CHOONG-IL]

As of Monday afternoon, 407,256 people signed a petition to the Blue House asking the central government to stop visa-free entrance to Jeju and consider scrapping or reforming the refugee law.

“After the refugee act [was enacted in 2013], foreigners can enter the country without a visa for a month and then stay without limit while their refugee status determination process is ongoing,” reads one petition submitted to the Blue House on June 13. “There have been cases where Chinese people came and falsely claimed refugee status.”

Last July, the Jeju police uncovered a group of Koreans who brokered a deal with Chinese nationals to help them apply for refugee status on the island and find jobs after the six-month mark. The Chinese nationals were told to pretend they were part of a persecuted religious group from China, and given legal advice on how to lengthen their stay.

Under the law, asylum applicants are entitled to receive a basic government subsidy for living and medical treatment. Their underage children are also entitled to public education.

Korea was the first Asian nation to enact such a law for refugees. Before the 2013 enactment, foreigners seeking asylum had to visit a local immigration office, which was impossible for people without visas to enter the country.

On June 1, the Ministry of Justice added Yemen to a list of nations whose citizens are required to have visas to enter Jeju. With its addition to the list, Yemen is among 12 nations including Iran and Syria whose citizens cannot enter Jeju without visas. But they can still apply for asylum if they reach Jeju Airport.

Since April 1994, when Korea first began accepting refugees, 32,733 people have applied for asylum in the country as of 2017, according to the Justice Ministry, but only 800 have been accepted, a 2.4 percent rate.