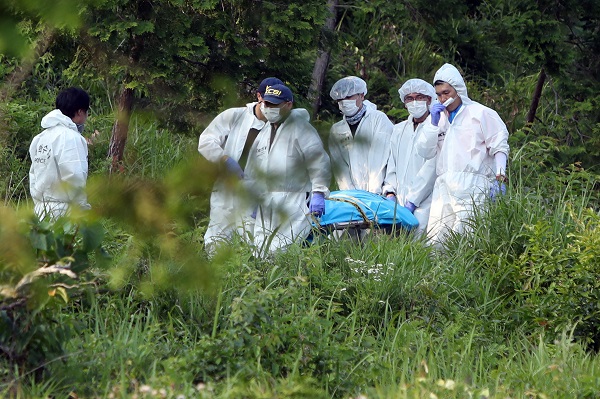 Police transport a body found atop a hill on Sunday, presumed to be that of a female high school freshman who went missing eight days ago. [YONHAP]

A body presumed to be that of a female high school student who went missing in Gangjin, South Jeolla last week was found Sunday atop a steep hill after an intensive search by police.

The corpse was stripped of all clothing, had its hair shaved off and was so severely decayed that the girl’s family members were unable to verify its identity. The only other clue found in the area was a lipstick next to the body.

The results of a preliminary autopsy released on Monday revealed that there was no clear evidence of exterior injuries such as bone fractures on the body. An additional examination and DNA test will be conducted to determine the exact cause of death.

The 16-year-old girl, whose name has not been disclosed by police, was a high school freshman living with her parents in Gangjin County. She went missing on the afternoon of June 16 after telling a friend through Facebook that she was going to nearby Haenam County because a friend of her father wanted to help her find a part-time job. The student never returned home, and her worried parents reported her missing about an hour past midnight.

The friend of her father, surnamed Kim, the most likely killer. He committed suicide following a host of suspicious activity the next day. Police believe his apparent suicide was prompted by fears that authorities were hot on his trail.

At around 2 p.m. on June 16, the girl sent her friend a Facebook message saying she was going with her father’s friend to look for a job and left home. Kim, who lived nearby in the same county, was parked about 600 meters away from her house, according to surveillance footage.

Surveillance footage shows Kim’s car back at his home in Gangjin County by 5:35 p.m. Other footage shows Kim cleaning his car at around 5:50 p.m. and burning what appears to be articles of clothing. Investigators believe he may have been trying to get rid of evidence.
When the girl’s parents went to Kim’s house that evening to ask about her whereabouts, he hurriedly fled through the back door.

After conducting a week-long massive search operation employing nearly 900 police officers, a helicopter and several drones, a breakthrough was finally made by the police on the eighth day on a local hill near to where the last signals from the girl’s cellphone were detected. A police dog picked up a scent and led the search party to a densely wooded area near the summit of the hill, where a body was found covered with grass and tree branches.

Investigators say that the steep slope up to the summit, slanted at almost 70 to 80 degrees, makes it unlikely that the body was carried up the hill. The victim may walked up it herself with the perpetrator, and murdered near to where the body was found.

Given Kim’s familiarity with the area – where he spent his childhood and buried his parents – the alleged culprit may have selected this spot after careful deliberation. It is not yet known how the girl was led to this overgrown and isolated place without offering resistance.
Police have not ruled out the possibility of an accomplice but no evidence has emerged to support this idea.