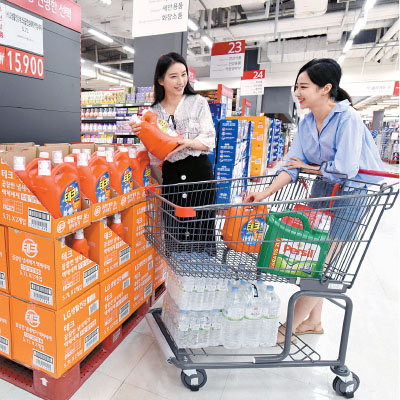 Homeplus launched its new line of Special stores, which combine the bulk discounts of a warehouse retailer like Costco with a conventional grocery store, today in Daegu.

Homeplus Special sells many products in bulk, but also offers individually packaged food and other goods like a grocery store.

Individually packaged products will be placed on the upper half of the store’s shelves while bulk goods will take up the lower half. Stores converted into Homeplus Specials will have their aisles widened by 40 centimeters compared to before, so that two large shopping carts can pass each other side-by-side.

“The model is intended to accommodate a large target audience ? from single-person households that buy smaller amounts according to what they actually consume, to business owners who purchase in bulk for lower price tags,” the company said in a statement.

Homeplus is currently ranked third in the local discount chain market behind Emart and Lotte Mart. The Special stores are the biggest project yet from Homeplus CEO Lim Il-soon, who took over leadership of the company last year.

The company added that a lot of the new ideas present at the new store came from a focus group of housewives.

“We found that housewives made a second stop to grocery chains near their house after visiting warehouse-style stores, in order to buy fresh food or small portions of side dishes,” said a Homeplus spokeswoman. “So we figured out how to combine them and fulfill demand for both kinds of stores in one.”

Store staff at Homeplus Special won’t have to constantly replace products on store shelves one-by-one, which is common practice at Korean discount chains.

Smaller items will be placed on shelves in the large containers that carried them during transportation. Staff won’t have to rearrange the shelf until an entire container is empty. The company explained this will reduce the amount of work staff will spend on restocking by 90 percent compared to the past.

A total of 20 stores will be remodeled into Homeplus Specials this year, with the Mokdong store in western Seoul and the east Daejeon branch scheduled to open next month.