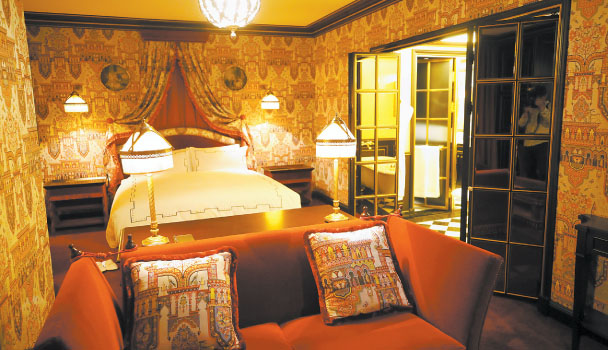 L’Escape, Shinsegae’s new boutique hotel, aims to combine the ambience of 19th-century Paris with intriguing restaurants and bars from Korean and foreign trendsetters.

Located in central Seoul, behind the main Shinsegae Department Store branch, L’Escape opened its doors to the press on Tuesday for the first time.

“Our ultimate goal is to be a lifestyle platform that offers trendy cultural content and food experiences to enjoy inside the hotel,” said L’Escape’s General Manager Kim Bum-soo. “365 days a year, L’Escape will have something going on, whether it’s a party or [pop-up restaurant by] globally renowned chefs and sommeliers.”

During the event, L’Escape unveiled a list of partners that collaborated to develop the hotel’s restaurants, bar and cafe. They include Seoul-based dessert cafe Maison M’O, bartender team Taxonomy and The Modern, a two-Michelin-star restaurant located in New York.

The hotel’s exterior and interior was designed by French architect Jacques Garcia, famous for his luxurious boutique hotels, such as the Hotel Costes in Paris and the NoMad Hotel in New York City.

Shinsegae also invested heavily in guest amenities for the new hotel. The company hired foreign experts and brands to develop exclusive products for L’Escape, from flower decorations to bedding. Perfumer Alienor Massnet, who has worked with Maison Martin Margiela and Memo Paris, developed a signature scent that will be made into candles and sprays applied to the guest rooms.

L’Escape’s general manager himself was a major contributor to selecting and signing partnerships. Better known as Pat2Bach, Kim is a well-known power blogger in food and leisure circles.

Kim was invited to join Shinsegae Group by its Vice President Chung Yong-jin in 2011, and has helped launch the company’s craft beer pub Devil’s Door and organized the eateries inside Starfield malls.

His appointment as the hotel’s general director is a bit of a surprise, though, as he has no experience as a professional hotelier.

“My ambition is to meld the food and cultural experiences I’ve had,” he said. “I think of myself more as a producer that shapes the hotel as a whole instead of a conventional general manager that greets guests.”