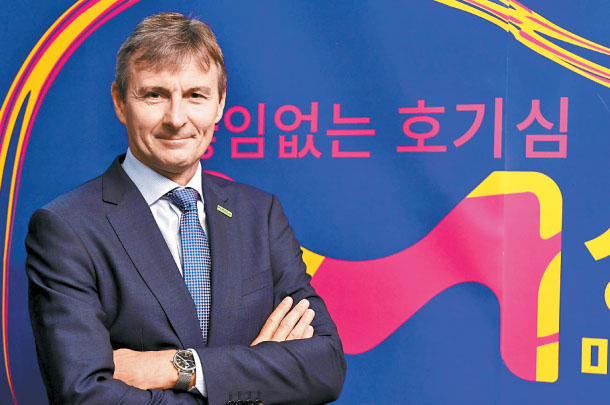 Glenn Young, managing director of Merck Korea, poses at a press briefing where he spoke on Tuesday in central Seoul to celebrate Merck’s 350th anniversary. The German company has had a Korean subsidiary for 29 years. [MERCK KOREA]

Merck, the German multinational company, is aiming to expand its presence in Korea’s life sciences and health care market, according to its local managing director Glenn Young.

“In Korea, we have a significant presence in the materials business [due to the strong display and semiconductor sector], but globally we have a much larger presence in life sciences and health care businesses,” Young said.

“Investment is upcoming for the life sciences business,” Young said, adding that Korea’s biological industry has been showing growth.

As part of the investment, Merck plans to break ground on a new manufacturing and distribution center dedicated to life sciences business, tentatively called the Lifescience Center, in the second half of this year.

The center will be in Songdo, Incheon, where Merck’s Korean clients like Celltrion and Samsung BioLogics are based. The company hopes to expand its overall life science business through the new center.

Merck said the Songdo center will give Korean clients quick and easy access to laboratory supplies that are necessary for developing new therapies and biosimilar products.

When asked about the significance of the Korean market, Young said that Korea accounts for 4.5 to 5 percent of Merck’s global business.

“That sort of a percentage doesn’t sound huge,” he said. “But without it, the company will be significantly smaller.”

Young also said that Merck is prepared for Korea’s new 52-hour workweek that will go into effect in July, since he has experienced a similar regulatory environment in European countries.

Young noted that the new workweek may create concerns at first, because companies need to consider how to reallocate their resources, but that companies will ultimately be able to adapt.