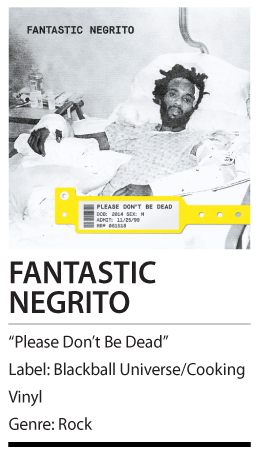 Fantastic Negrito has an incredible, inspiring backstory but it would be a shame to unwittingly allow it to overshadow the issue at hand, the truly fantastic blend of blues, funk, rock and R&B created on “Please Don’t Be Dead’’ by the man born Xavier Dphrepaulezz.

As Negrito’s songs feed on his personal experiences, you should at least know that he grew up with 13 siblings in a Muslim family which moved from Massachusetts to Oakland when he was 12, around 1980. If album opener “Plastic Hamburgers’’ sounds like a Chris Cornell/Lenny Kravitz mashup, “Dark Windows’’ is a heartfelt tribute to the former, whom Negrito toured with extensively. “A Boy Named Andrew’’ alternates a Middle Eastern-sounding motif with R&B, while “Transgender Biscuits’’ has Tom Waits-like bullhorn vocals as well as a small oasis of pop sounds.

Negrito puts himself in the middle of the fray with “Please Don’t Be Dead’’ - such a contemporary title - and offers his songs for the soundtrack of the lives of those who won’t give up and are willing to carry on. AP