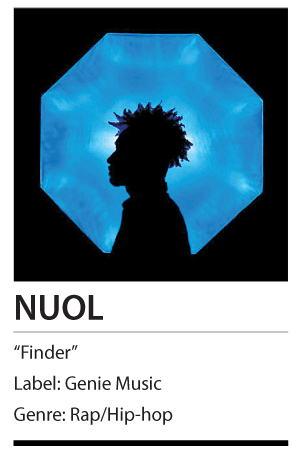 When this album first came out in March, it consisted of one track. One chimera of a track that included 14 incoherently connected compositions. A fan posted on social media, “this is the most concise response to people who only listen to the title track in an album,” and Nuol replied with a cheerful “#Bingo.” After mixed reviews from critics and requests from fans to “split” the original track, this re-release features 23 songs, including instrumental versions of the 14 compositions.

With inspirations from traditional Korean string music, piano jazz and neo-soul, Nuol lays out a biography of the Korean psyche, with his own life as a case study. Nuol clearly has a lot to talk about: institutions to blame, roots to find and blues to sing.

Fortunately, the songs hit on all the right notes. Featured rappers help shape a coherent message that is powerful, unapologetic and raw. The title track “Finder” is mercilessly punctuated by Huckleberry P, while Basick calmly shows off his chops in “Big Item.”

Experience and industry connections equate to a good album. #Bingo.