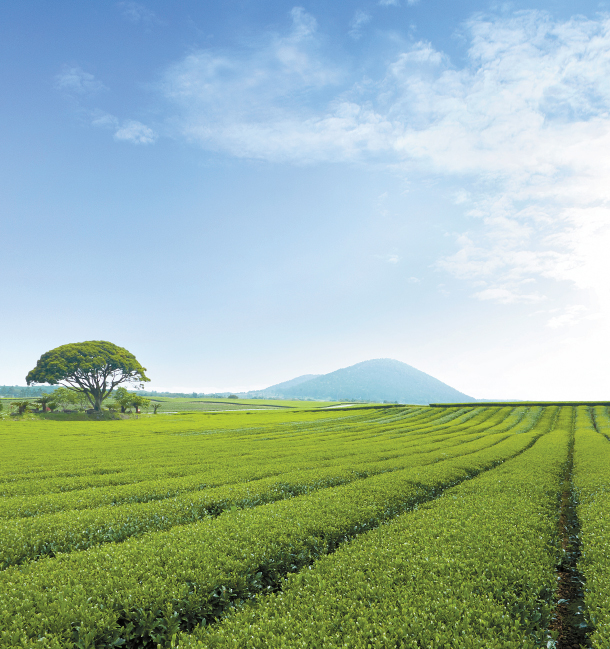 Amorepacific, under the leadership of Suh Sung-hwan, the company’s founder and president, began cultivating green tea on a farm southwest of Mount Halla on Jeju Island in 1979.

Since then, Amorepacific has been continuing its special relationship with Jeju Island to revive traditional tea culture.

Amorepacific’s OSULLOC organic tea farm is over 800 acres in size. The green tea produced in the tea farm is loved by tea lovers through OSULLOC, the brand of tea that truly reflects Jeju’s nature.

In 2001, the OSULLOC Tea Museum at the Seogwang tea farm was built for tea culture expansion, and last year, 1.8 million people visited. A total of 15 million people have visited the museum. Now, the museum is one of Jeju’s main tourist attractions.

OSULLOC Tea Museum was built in 2001 to expand tea culture and give a pleasant experience to tea. [AMOREPACIFIC]

Visitors can learn about the story of OSULLOC and the superiority of green tea cultivated in a natural environment. Jeju Island is special, as it was where artist Kim Jeong-hui was exiled in 1840. He cultivated tea and met with many people over tea. It also has the best climate and environment for producing high-quality tea. The museum is in front of Seogwang Tea Farm, and visitors can experience a combination of traditional and modern cultures.

The museum has four main features. The OSULLOC observatory is a must for all visitors. They can see the Seogwang tea farm, Mount Halla, Mount Sanbang and Mount Songak all at once. At the tea cup gallery, tea utensils from the Three Kingdoms Period (57 BC-668 AD) up to the Joseon Dynasty (1392-1910) are on display. Next up is an exhibit on the teacups of the world, where visitors can enjoy the teacups and culture of Europe and the history of tea in the East and West. Finally, tea masters roast tea in front of visitors and provide them with tea.

The OSULLOC tea farm produces teas with different characteristics depending on the soil, climate and technology used. Amorepacific recommends visitors travel with “taste, scent and color” in mind on Jeju Island in 2018.

The most recent tea farm was created in Namwon village in Seogwipo on Jeju. The farm was built with experience and technology gained from creating other farms. The new farm has excellent geographical and climatic characteristics, with a lot of rain and wind from the southern sea.

Tea is produced at this farm with scientific and systematic methods.

The OSULLOC Tea Stone opened in March 2013 to spread tea culture. Amorepacific aims to revive traditional tea culture, taking inspiration from our ancestors’ desire to expand and express our art and culture with calligraphy. The stone is connected to artist Kim Jeong-hui’s exile road. This space also has an artist’s exhibition and a tea room that visitors can relax in.