At Jeju Forum, many roads lead toward peace

At Jeju Forum, many roads lead toward peace 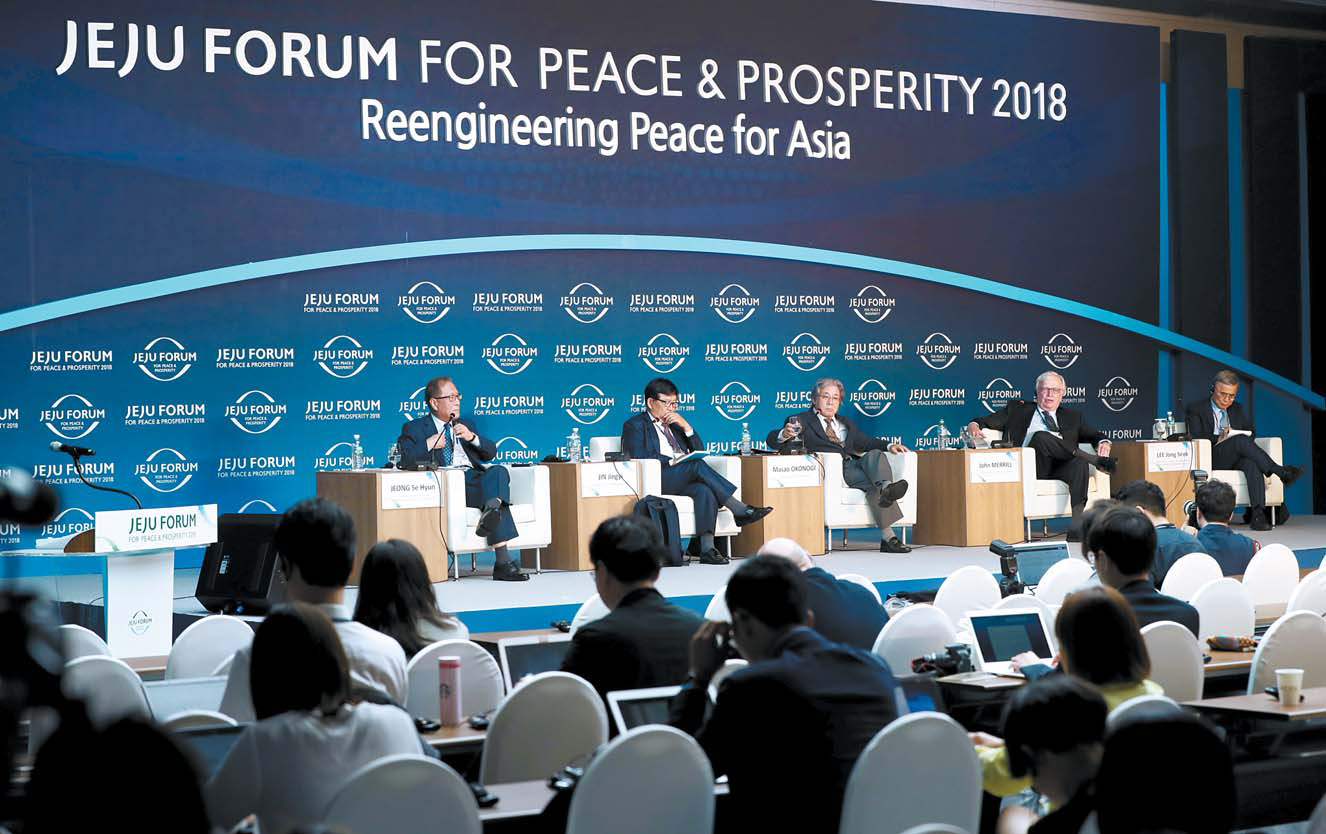 A panel of experts and former government officials speaks at a session titled “The Summits and Beyond: Continuity and Change of North Korea” at the 13th annual Jeju Forum for Peace and Prosperity on Tuesday at the International Convention Center Jeju in Seogwipo. From left are Jeong Se-hyun, former unification minister and chairman of the Korea Peace Forum; Jin Jingyi, an emeritus professor at Peking University; Masao Okonogi, an emeritus professor at Keio University; John Merrill, a visiting scholar at Johns Hopkins University; and Lee Jong-seok, a senior research fellow at the Sejong Institute. [KIM KYUNG-ROK]

SEOGWIPO, Jeju - Foreign affairs and security experts weighed in on the sensitive process of building permanent peace on the Korean Peninsula, including the effects of domestic politics and external circumstances, at the 13th annual Jeju Forum for Peace and Prosperity, which kicked off on this scenic island off Korea’s southern coast on Tuesday.

John Merrill, a visiting scholar at Johns Hopkins University, advocated for the suspension of joint military exercises between South Korea and the United States, calling the deployment of U.S. bombers to the Korean Peninsula “excessive” and said it “sends the wrong message to North Korea.”

About 5,500 people from 70 countries have gathered at the International Convention Center Jeju for a three-day event engaging on the theme of “Reengineering Peace for Asia.” The forum comes at a critical time for the Korean Peninsula, on the heels of a landmark summit between a sitting U.S. president and North Korean leader and two summits between the Korean leaders.

World leaders, Nobel laureates, diplomats, lawmakers, scholars and business executives from around the world have gathered on this picturesque island to analyze the Korean Peninsula’s geopolitical situation and provide a vision for its future.

Merrill, a former chief of the U.S. State Department’s Northeast Asia Division of the Bureau of Intelligence and Research, rejected the initial reaction of U.S. foreign policy wonks who felt “there wasn’t much there” after the summit between U.S. President Donald Trump and North Korean leader Kim Jong-un earlier this month. He called the backlash “overdone.”

“I think that was a completely wrong interpretation,” Merrill said. “The meeting with Kim Jong-un was an icebreaker meeting and for creating a certain mood. The key to understanding Trump is that he is a businessman and real estate developer. You chat them up first. That was what President Trump was doing with Chairman Kim.”

Merrill said he was “very encouraged by the initial vibes coming out of the meeting,” adding that Trump’s poll numbers were high on North Korea policy. “Some Democrats are backtracking on their initial criticism,” he noted.

The foreign policy expert was speaking at a session called “The Summits and Beyond: Continuity and Change of North Korea,” organized by the East Asia Foundation. Jeong Se-hyun, a former unification minister and chairman of the Korea Peace Forum, moderated the session.

On sanctions, Merrill said they were “a way for the U.S. Treasury to exercise bureaucratic power at the expense of the State Department.” “Sanctions are going to have to be eased … as the process goes along,” Merrill said, noting that Pyongyang will have to get something in return if a denuclearization deal is “going to stick.”

However, Merrill also pointed that the current policy direction on North Korea is not “irreversible” and “could change” depending on domestic and external factors.

“Polls show that President Trump’s policy toward North Korea is maybe the most popular thing his administration has done,” Merrill said. In South Korea, the ruling Democratic Party also scored a landslide electoral victory in local races, and in North Korea, Kim Jong-un is “enjoying a huge image makeover.”

However, he warned, some factors could harm that momentum, including the Democratic Party gaining control of the U.S. House of Representatives in the November midterm elections and growing tension on trade between the United States and China.

“On the whole, we are moving in good direction,” Merrill said, “and it’s nice to see someone working on the problem seriously.”

Jin Jingyi, an emeritus professor at Peking University, voiced concern about China passing in talks to declare a formal end to the 1950-53 Korean War, which concluded with an armistice agreement, not a peace treaty.

“Three parties mean China is not going to be part of the process,” Jin said, referring to North Korea, South Korea and the United States, “when it’s largely a symbolic gesture. I believe that the direct participants to the Korean War should take part in the event to end it.”

China had contributed troops to the three-year conflict. “I’m concerned there could be conflict between China and the United States which can bring disturbances in the process and a clash of big powers on Korean Peninsula,” Jin said. He warned against a repeat of history and said a declaration to end the Korean War would mean China is no longer an adversary. “The establishment of a peace regime on the Korean Peninsula means a peace regime in Northeast Asia,” Jin said.

Lee Jong-seok, a senior research fellow at the Sejong Institute and former unification minister, said that negotiations with the North are not just about denuclearization but the North’s desire to shed its pariah status. “North Korea’s external policies have a clear direction and will be maintained for a while,” he said. The economies of the countries neighboring North Korea are “organically connected.” Through harsh sanctions, “we are restraining ourselves from having economic cooperation,” which could render North Korea’s nuclear weapons useless in the future, he said.

“A peace regime,” he added, “is a series of clear or implied principles, standards, regulations or policy procedures made between bilateral or multilateral countries in order to maintain peace.”

“China doesn’t want to lead the process of establishing a peace regime on the Korean Peninsula,” he said. “However, we want to process to happen stably.”

Experts from members of the Association of Southeast Asian Nations (Asean) discussed widening North Korea’s network and getting the country more involved with regional affairs at the session titled “Strengthening Korea-Asean Partnership through Korea’s New Southern Policy,” hosted by the Jeju Peace Institute.

“We need to invite North Korea to get engaged in various multilateral security dialogues,” said Dewi Fortuna Anwar, a research professor at the Indonesian Institute of Sciences. “Let’s invite North Korean defense officials to the Asean Defense Ministers Meeting. I am also always in favor of including Asean in the six-party talks.”

“Asean could contribute to maintaining and promoting peace on the Korean Peninsula,” said Yoon Soon-gu, deputy minister for political affairs at South Korea’s Ministry of Foreign Affairs. “Vietnam, for example, could invite North Korean officials to show how it transformed its controlled economy into a market economy.”

During his visit to Indonesia last November, President Moon Jae-in announced his plan to pivot to the Southeast Asia region, christening it the “New Southern Policy.” Moon at the time said he hoped to elevate South Korea’s relations with Asean to the level of the region’s ties with the United States, China and Japan.

“South Korea got sucked into the issues of Northeast Asia that you didn’t pay enough attention [to us],” said Ravi Velloor, associate editor of global affairs at The Straits Times. “Personally, my worry is now that things are getting better, your attention will be focused on relations with the North that you will forget us in the south.”