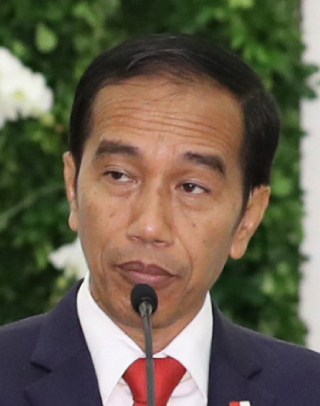 President Joko Widodo of Indonesia extended an invitation to South Korean President Moon Jae-in and North Korean leader Kim Jong-un to come to his country for the Asian Games in August, a government official exclusively told the JoongAng Ilbo on Tuesday.

The sporting event will take place in the Indonesian capital of Jakarta and the Sumatran city of Palembang from Aug. 18 to Sept. 2. If the two Korean leaders do attend the Asian Games, they could meet for a third time.

A government official told the JoongAng Ilbo that President Widodo met with the two Koreas’ ambassadors to Indonesia in his presidential palace on April 30, three days after Moon and Kim’s first summit. “As far as I understand it, President Widodo invited President Moon and North Korean leader Kim to visit his country during the Asian Games at the meeting,” the official said on the condition of anonymity.

Kim Chang-beom represented South Korea at the meeting, and An Kwang-il represented the North.

Moon is considering a trip to Indonesia for the Asian Games, according to officials with knowledge of the matter. Whether Kim will attend remains unknown. His decision could hinge on the pace of talks with the United States on its denuclearization after he met with U.S. President Donald Trump on June 12.

If a meeting between Moon and Kim is realized at the Asian Games, it will be the first inter-Korean summit held outside of Korea. There have been four such summits so far. The most recent two occurred over the past two months between Moon and Kim at the border village of Panmunjom, and the first two took place in 2000 and 2007 in Pyongyang, North Korea’s capital.

The two Koreas agreed last week to have their athletes march together under the flag of the Korean Peninsula at the opening ceremony of the Asian Games as they did for the PyeongChang Winter Olympics in February.