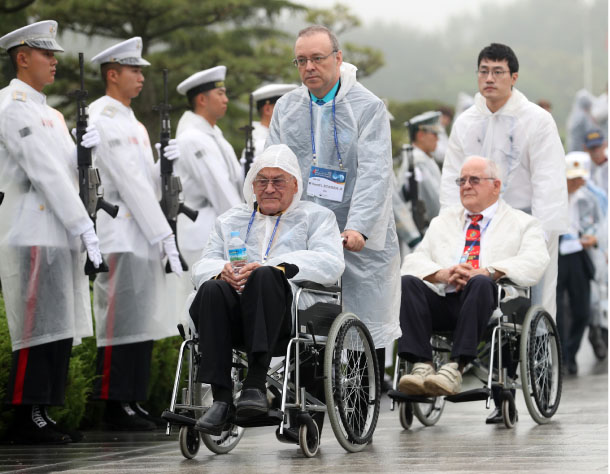 UN veterans in wheelchairs attend a memorial service in the UN Memorial Cemetery in Busan on Tuesday to honor UN soldiers who died during the Korean War (1950-53). [YONHAP]

President Moon Jae-in on Tuesday promised increased support for foreign soldiers who helped defend his country in the Korean War, calling them the heroes of a “miracle” that made the country not only survive but flourish.

“If what the Republic of Korea has achieved up to date is a miracle, United Nations veterans are the heroes of that miracle,” Moon said in a special message marking the outbreak of the Korean War 68 years ago Monday.

“We will remember each and every UN veteran in the name of this country. Furthermore, we will work to make sure the veterans, their families and descendants will be proud of where the Republic of Korea stands today,” he added.

Moon earlier planned to personally deliver his message in a ceremony held at the UN Memorial Cemetery in Busan, located some 450 kilometers (280 miles) south of Seoul, that honors 40,895 soldiers from 16 countries who were killed or went missing in the 1950-53 Korean War.

His trip, however, was called off at the last minute due to weather conditions.

“Today, I am very pleased to say we are able to tell UN veterans that your blood and sweat were not shed in vain. The Republic of Korea has risen from the ashes of war and achieved a great development of its economy and democracy,” Moon said.

The president noted his country was also working to repay its debt to the international community with South Korean troops serving as UN peacekeepers in Lebanon and South Sudan.

Moon promised support for the veterans themselves, as well as their families. “Most of the veterans are now of old age. The country will work to have as many of them as possible visit South Korea before it’s too late,” he said.

Also, the country will launch a new visiting program for the offspring of UN veterans. “It will offer scholarships to the descendants UN veterans who are facing economic difficulties and also expand its support for those who wish to study in the country,” the president said.

The president also vowed to step up efforts to establish peace on the Korean Peninsula.

In a historic summit held at the border village of Panmunjom on April 27, Moon and North Korean leader Kim Jong-un declared there will never be another war on the Korean Peninsula.