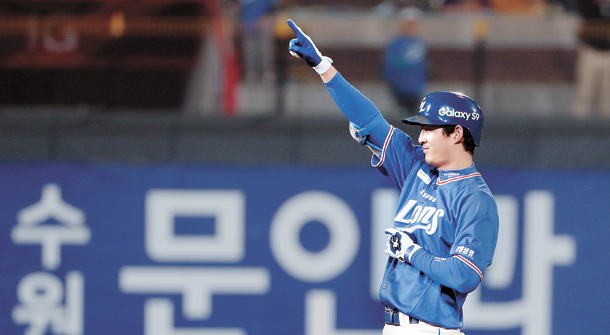 The Samsung Lions need a new king. The Daegu baseball throne has sat empty since the retirement of legendary first baseman Lee Seung-yuop last season, but former rookie of the year Koo Ja-wook might just be the man to take the crown.

Koo’s coronation seemed a long way off at the start of the season. In the first seven games he had a batting average of .194 with three RBIs and six hits. Things took a turn for the worst in April when he suffered a rib injury. Koo missed an entire month and returned to the Lions on May 7. During this period the Lions won nine games and lost 16.

“I felt very sorry to the team and was personally disappointed [in myself] because I couldn’t play baseball when I had to,” Koo said.

Koo’s batting average has always been consistent - he hasn’t finished a season with an average below .310 since joining the KBO in 2015. Over the weekend, when the Lions played a series against the Doosan Bears, Koo had three straight multi-hit games.

“I’ve been batting well recently but it didn’t turn into a good result,” Koo said. “I’m trying to maintain my good condition now.”

But Koo’s rally came too late for him to earn a spot on the national team for the 2018 Asian Games. However, the Lions’ outfielder maintains that missing out on the spot just motivates him to work harder.

“I still need to improve a lot,” Koo said. “It means that there are a lot of players that are better than me.”

Koo made it clear that his injury wasn’t the main reason he struggled at the start of the season. Rather, he said it was his swing not feeling right.

“My body wasn’t ready,” Koo said. “The swing just didn’t feel right. So I studied [my swing] and talked a lot with the coaching staff and through that process, I got better.”

More than his individual statistics, Koo is disappointed about the team’s performance so far this season.

After graduating from Daegu High School, Koo was drafted by the Lions in 2011. But it wasn’t until the 2015 season, after spending two seasons playing for Sangmu Baseball Team in the Future’s league, that he made his KBO debut. Koo made a significant impact on the team and won the KBO’s rookie of the year award, with an impressive .349 batting average with 11 home runs and 57 RBIs in 116 games.

Once Lion King Lee retired after the 2017 season, Koo was continuously mentioned as the next Lions’ player to fill Lee’s shoes, but Koo has so far proven to be a more consistent player than a slugger. Koo has exceeded two-digit home runs every season and last year he hit a career high of 21 home runs. So far this season he has only hit two.

More than a personal goal, Koo’s biggest target for the season is to lead the Lions to the postseason. Since 2015, since losing the Korean Series to the Bears, Samsung has struggled at the bottom of the league.

“I’m only focused on winning,” Koo said. “Just because I have good individual statistics doesn’t mean that I had a good season. My team has to play well for my quality to get better as a player.”