SeMA creates a new future for its anniversary: ‘Digital Promenade’ is filled with works that welcome participation

SeMA creates a new future for its anniversary: ‘Digital Promenade’ is filled with works that welcome participation 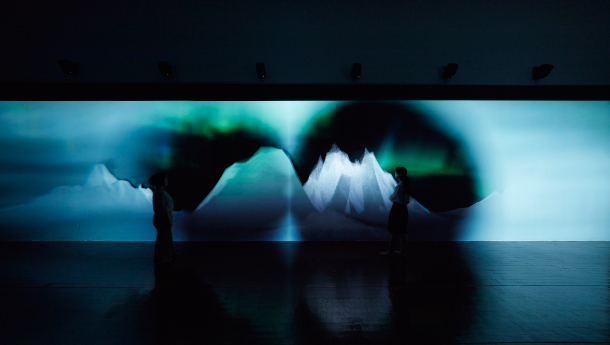 Artist Kwon Ha-youn’s work “When You Get There” displays a scenery of mountains in a valley, which pop up according to the movement of the viewers, which is detected by motion sensors. [SEMA]

Some celebrate birthdays as an opportunity to look back on life and the things one has accomplished, while others choose to look forward to the future and what lies ahead. For its 30th birthday, the Seoul Museum of Art (SeMA) decided to do both, with its “Digital Promenade” exhibition that looks both back at its early days from 1988 and into the future, in which it hopes to lead Korea’s art scene with new and challenging art works.

SeMA first opened its doors to the public as a city-run art museum in 1988 in a building that previously stood as Seoul High School. In 2002, it moved into the former Supreme Court building in Seosomun, central Seoul. It later expanded and created the Nam SeMA in southern Seoul in 2004, and the Buk SeMA in northern Seoul in 2013.

With this anniversary exhibit, SeMA examines what the role of the museum is, what a museum can do and what it means to collect art.

Co-hosted by SeMA and the Korea Creative Content Agency, the museum took the chance to look through its archive, which consists of some 4,700 pieces, and chose 30 works that go well with the themes of nature and walking. The exhibition takes place on the second and third floors of the SeMA main building, inviting the visitors to walk through the stairs and hallways of the museum and take in the exhibition in its entirety.

While 30 works from the museum’s collection sit next to 10 new works by multimedia artists inside the exhibition halls, the digital stroll also takes place along the staircases and in the hallways, which are adorned with a futuristic graphic design created by graphic designer Jin Jung, who is a professor at Kookmin University. “The graphic is a symbol of both the museum’s arch doors, and the digital doors that allow people to communicate with each other through the internet,” said Yeo Kyung-hwan, the curator of the exhibition. 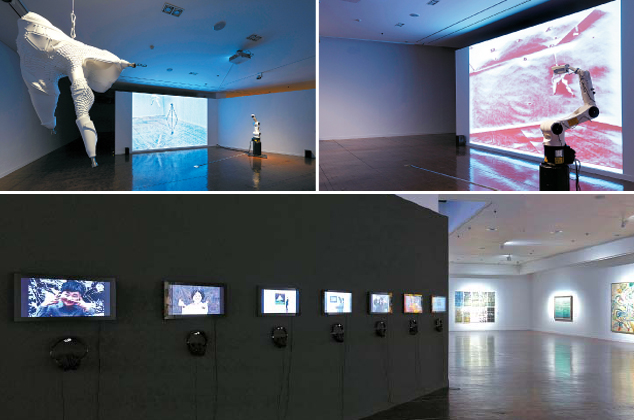 The 10 new works of various mediums guide visitors through a digital art world, ranging from the relatively common form of videos to more complicated technology using artificial intelligence, a location-based sensor or robotics. The digital strolls begin with Park Ki-jin’s “Gong,” a metallic sphere 2.5 meters (8.2 feet) in diameter, which welcomes visitors first by shaking and sweating as if it’s alive, and playing the mix of sounds it receives from visitors who connect themselves to the ball through a smartphone app developed by the artist.

“Poster Generator 1962-2018” by studio Everyday Practice is quite self-explanatory, in that visitors can participate by creating different art posters. But what makes it interesting is the process through which the posters are made: Visitors choose a work among a pool of 19 pieces on display at the exhibition; they can then choose three words that have been used to describe the chosen work by critics and reporters in the past. Then, the program generates a poster that reinterprets the work based on the three words. 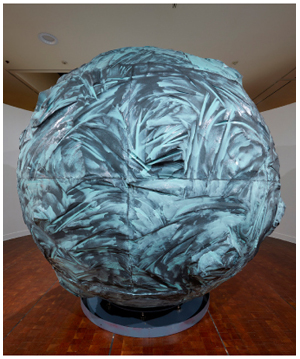 “We have put in a random code in the program, so that the end result is slightly different from what the audience intends,” said Kwon Jun-ho from the studio. “This is to show the miscommunication from designers as creators, who have to create their work by communicating with their employers. But within that process always exists a misunderstanding. We wanted to show that through this work, and how sometimes that miscommunication becomes the source of creativity.”

The exhibition’s grand finale is Kwon Ha-youn’s work, “When you get there,” a perfect embodiment of taking a stroll in nature, but in a digital form. Taking its inspiration from artist An Kyon’s “Scenery in Dream” (1447), the digital screen plays a moving scene of a dark valley with white mountains springing up in different rhythms, as if the scenery changes with the viewer’s perspective. The work features motion sensors, allowing for viewers to feel as if the mountains are moving along with them as they walk from one end to the other. The sensors can detect a maximum of six people’s movements at once, and mountains pop up according to each person’s steps.

“We wanted to have the audience participate as much as possible with this exhibition, and used the different museum spaces in different methods for that to happen,” said curator Yeo. “We have many issues these days in the modern world, and the modes of communication change everyday. This exhibition thinks about what meaning art has in this era, and how it can survive as a tool of expression in this world. By allowing the audience to take part in the works and be in the same space with them, we make the experience of viewing an exhibition into a walk through a digital promenade.”