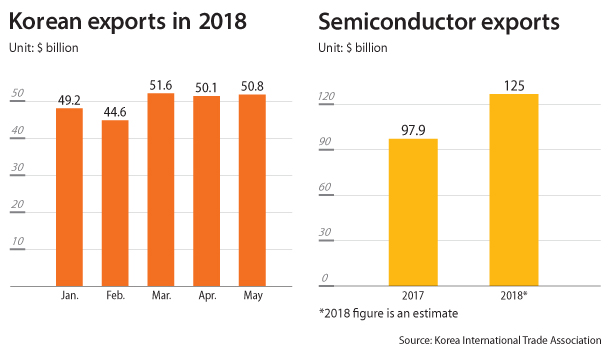 Semiconductor shipments are likely to exceed $100 billion this year, according to a trade association, the first time in history for a single export product from Korea to surpass that threshold.

While the figure itself is an impressive achievement, analysts and industry insiders continue to warn about an economy so dependent on one product.

According to a report by the Korea International Trade Association (KITA) on Wednesday, Korea’s exports are likely to reach $605.0 billion this year, a 5.5 percent increase from 2017. KITA estimated that the total amount of trade - which combines imports and exports - will increase by 8 percent to reach $1.136 trillion, the second year in a row for the figure to surpass $1 trillion.

Exports in May totaled $50.8 billion, up 13.2 percent from a year ago and rebounding from a year-on-year fall in growth in April.

In the report, KITA explained that the demand for Korean products will remain steady and that the information technology sector will stay robust in the second half of this year.

Korean semiconductors will continue to do well, according to the trade association.

The forecast by KITA showed that the amount of chip exports will be as high as $125 billion, up 27.7 percent from a year ago, accounting for 20 percent of the total outbound shipments from Korea.

“The price [of computer chips] remains at a high level due to the increase in the volume of storage required for an IT device,” KITA explained, adding that the export of non-memory chips, such as central processing units, will go up due to growth in new markets such as the internet of things and autonomous vehicles.

While computer chips will be the Korea’s cash cow again this year, analysts are worried about the country’s economy if the industry goes into a downturn.

In a report released on June 22, the Hyundai Research Institute, a private think tank, said Korean exports, while on the rise, has a number of weaknesses including a heavy dependence on one product.

The report pointed out that the proportion of semiconductors to total exports in Korean has risen from 12.6 percent in 2016 to 17.1 percent in 2017 and over 20 percent this year.

“When the level of concentration on a certain item in exports increases, volatility in the growth of the country’s economy will increase,” the institute reported. “If Korea continues to rely too much on a handful of products, the business cycle of those industries could sway the direction of the entire export sector.”

According to an estimate by Gartner, a U.S. research firm, the semiconductor industry will grow by 7.5 percent in 2018.

“After growing by 22.2 percent in 2017, worldwide semiconductor revenue will revert back to single-figure growth in 2018 before a correction in the memory market results in revenue declining slightly in 2019,” said the company in a press release in January this year.

Yun Chang-hyun, a business professor at the University of Seoul, said he’s worried about the rise of China in the semiconductor sector.

China recently created a $47 billion fund to bolster its semiconductor industry, the second of its kind.

New chipmakers in China such as Yangtze Memory Technologies are set to begin production in the second half of this year, according to KITA.

Meanwhile, Beijing has ramped up its investigation into Samsung Electronics and SK Hynix, Korean chipmakers and two of the biggest semiconductor producers in the world, for alleged price fixing, a move seen as an attempt to bring down the price of computer chips.

“Concentration risk is dangerous,” said Yun of the University of Seoul. “We see a worsening condition for all export items across the board, even for Samsung which seems to be struggling in other businesses other than semiconductors.

“We need an option B that could be strong when option A falls through,” Yun added. “With this structure, the overall economy of Korea will take a serious blow when something happens to the semiconductor industry.”