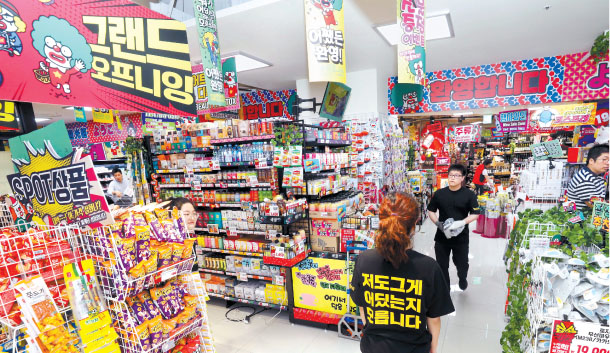 An employee wears a T-shirt that reads “I don’t know where that is either,” in Emart’s Pierrot Shopping in COEX, southern Seoul, on Wednesday. [EMART]

Emart’s Pierrot Shopping in COEX, southern Seoul, opens to the public today aiming to be a “Fun & Crazy” shop targeting consumers in their 20s and 30s.

The store openly benchmarked its concept on renowned Japanese retailer Don Quijote. A popular destination for travelers in the country, the store is famous for the huge range of goods it stocks. 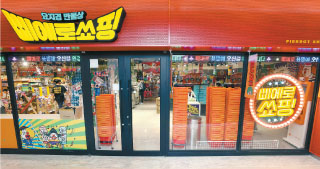 Like Don Quijote, Pierrot Shopping will offer a huge and diverse range of products, densely filling two stories with a combined size of 2,513 square meters (27,000 square feet). The basement floor has a huge collection of alcohol and snacks from in and outside Korea.

On the other side of the basement floor are wigs and costumes. A set of pink curtains hides a small space filled with adult toys. Glass-windowed units on the first floor hold leather bags from Prada and Fendi.

Fresh food, wireless vacuum cleaners, smoking pipes, fake eyelashes and pet food are among the 40,000 products available at Pierrot Shopping. One strange amenity in the store is a smoking room which resembles the interior of a subway train. An information desk and electronic kiosks offer tax refunds for foreign customers.

“We designed the store to be a place where young people can come to play and look around without a clear shopping purpose,” said Pierrot Shopping’s brand manager, Yoo Jin-cheol. “You can come here to find relief from everyday stress, casually pick up things that look intriguing and buy them just because they’re affordable - ‘easy shopping’ is the concept.”

Most of the products are inexpensive, but Pierrot Shopping also plans to constantly offer discounts for their thrifty target consumers.

Another way Pierrot Shopping is designed to emulate Don Quijote is in the merchandising. The shelves are packed with products from floor to ceiling and the aisles are so narrow that in some places it’s difficult for two people to pass each other.

The retail giant is well aware of the maze it has created - staff at the new store will wear uniforms with “I don’t know where that is either” printed on the back.

This form may not be new to those who are familiar with the Japanese retailer, but in Korea its stands out in stark contrast to domestic large-scale retailers that prioritize space and neatly arranged products so that consumers can easily find what they are looking for.

Emart explained that the intention was to do the exact opposite - the more complicated the store is, the more consumers will have to venture around the aisles and make unexpected discoveries.

Pierrot Shopping is the latest of Shinsegae Group Vice President Chung Yong-jin’s “retail experiments.” Chung hinted at the launch of a local version of Don Quijote this year during meetings with local media outlets. Chung has been developing retail sites that focus on ensuring a “fun experience” for consumers, as seen in the electronic kidult shop Electromart and Starfield Mall, which he packed with sports and foods options.

“The plan is to open three Pierrot Shopping branches this year,” said Yoo. “The second and third branches will be smaller than COEX - one will be built in the Doota Mall [in Jung District, central Seoul] and the third is currently under consideration to open in Nonhyeon-dong [in Gangnam District, southern Seoul].”