Gen. Brooks: Not all drills will end

Gen. Brooks: Not all drills will end 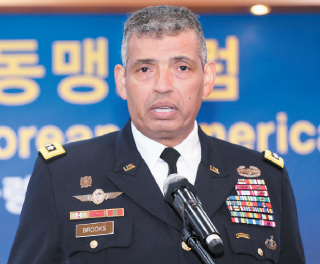 The chief of the U.S. Forces Korea dismissed concerns on Wednesday that the recent decision by Seoul and Washington to suspend their joint military exercises would lead to the end of all other allied drills and weaken deterrence capabilities.

Gen. Vincent Brooks defended the decision and voiced hope that the suspension of exercises would help the allies build trust with North Korea and add “greater effectiveness” in ongoing talks on the reclusive country’s denuclearization.

“I don’t anticipate that this is an end of all exercises and training as we know it, but rather, these visible exercises that are right upfront that may cause unnecessary irritation at a time when the need for trust-building is so important,” Brooks said at a forum in Seoul. “I will eliminate the doubt and concerns about all military training going away. I don’t have any such instruction coming my way. I don’t feel that is the spirit of our leaders, but rather to create a room for them to be able to navigate the way forward…to give them room if this helps set the conditions for them to have greater effectiveness in their dialogue and discussions.”

To facilitate ongoing talks with North Korea, the allies have decided to indefinitely suspend the Korea Marine Exercise Program and Freedom Guardian exercises - often referred to alongside South Korea’s Ulchi exercise as UFG - which were slated to kick off next month and in August. The move triggered speculation that Seoul and Washington might halt other drills in a way that might undermine their decades-long security alliance. The move could damage their military preparedness, critics say, while the North has yet to take crucial steps toward denuclearization.

Addressing worries about the possible impact of the suspension, Brooks pointed out that the allies have a “reason to be in doubt” in reference to the still-present physical threats from the North.

But, he noted, there is also a reason to have the “expectation.”

“Remember, this is two ways,” he said. “They are looking for indications from us also. I think the decision about the upcoming exercise, the UFG, is related to that to signal an intention to move forward in a positive direction unlike the direction we have gone before. So my encouragement is we maintain that spirit of moving forward even with the doubt and we look for ways to help North Korea save face where possible but while also keeping pressure on them to not back up.”

Brooks also pointed out a number of ways to maintain military readiness while putting large-scale exercises on hold. They include exercising flexibility in the execution of exercises.

“I had lots of discussions [with South Korean military officials] about it,” he said. “How can we creatively and innovatively create readiness in our force and preserve it once we have created it? The exercises are flexible. That is what President Moon has spoken about. Those four levers are where the flexibility comes from - timing, scope, scale and communication volume. That is the way we are approaching and will approach.”

At the forum, Brooks also rejected speculation about the possible withdrawal of U.S. forces from the South amid a thaw with the North.

In response to a question about whether the alliance could see its end should permanent peace come to the Korean Peninsula, the commander said, “Let’s just live the alliance.” Brooks also reassured South Koreans that the United States is “willing to shed blood if necessary.”

“But that should also be very clear that the U.S. knows the cost of shedding blood,” he said. “It is not just a human toll - it is a cost on society, a cost on infrastructure. It is the impact on the world when you have a massive loss of life like what the Korean War was. We should never.”