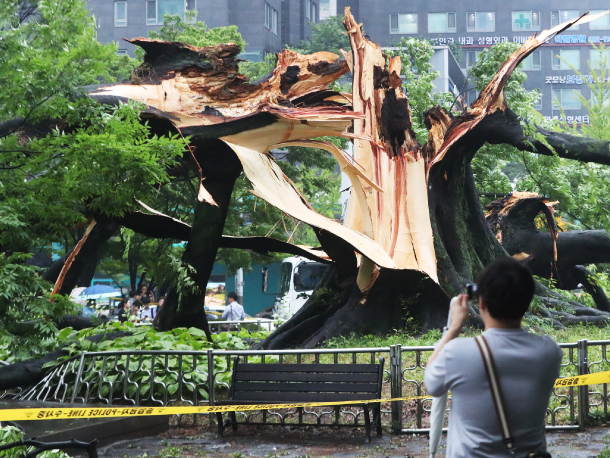 The downpour marking the beginning of the rainy season on Tuesday led to a series of accidents in different parts of the country, with one in Gyeonggi resulting in fatalities.

Four teenagers were killed and one was severely injured in an automobile accident in Anseong, Gyeonggi, in the middle of heavy rainfall.

All five victims - local high school and middle school students from the area - were riding in a rental car when it skidded off a slippery highway and crashed into a building. The teen who was driving, aged 18, did not have a driver’s license.

Around 91.5 millimeters (3.6 inches) of rain fell on Anseong Tuesday, which could have impaired the visibility of the driver. Surveillance footage, however, shows that the teen was driving nearly 100 kilometers (62 miles) per hour before sliding off the wet road when attempting to make a left turn and crashing into a nearby building.

The police are investigating how the teens got their hands on a car without a driver’s license. An employee of the car rental service which rented out the vehicle to the teens claims he checked a driver’s license and identification before renting out the car.

Also in Gyeonggi, a 500-year-old tree in Suwon was felled by powerful winds and rain which blew off its four main branches and ripped its trunk apart. The tree is said to have produced the wood from which a number of rafters were carved during the 1796 construction of the Hwaseong Fortress during the reign of King Jeongjo of the Joseon Dynasty (1392?1910). It was designated as a nurse tree - trees with historic or scientific value placed under government protection - by the Suwon city government in 1982.

The rain also caused a mishap on Jeju Island, off Korea’s southern coast, where a thunderstorm and strong winds accompanied over 100 millimeters of rain on Tuesday.

An Asiana Airlines plane that departed from Seoul’s Gimpo International Airport that day was beginning its descent to Jeju at around 7:35 a.m. when it was suddenly struck by lightning.

Though the plane - flight number OZ8911 - did not receive noticeable damage, the hit delayed the plane from landing for over an hour, and it finally landed at Jeju International Airport at 8:39 a.m.

The plane was set to return to Gimpo, but the trip was canceled due to maintenance issues.

Later that morning, Eastar Jet flight ZE205, which left Gimpo at around 7:23 a.m., was unable to land in Jeju due to strong winds and turbulence. Wind speeds reached almost 24 meters (78.7 feet) per second that day near Jeju’s airport, and a strong wind alert was issued by local authorities.

After circling in the air waiting for the winds to stop, the plane eventually had to be rerouted to Cheongju International Airport in North Chungcheong, where it refueled before returning to Jeju at around 11:23 a.m.

Additional weather issues that day led to major disruptions in flights in Jeju, where a total of three flights were canceled and 27 were delayed.