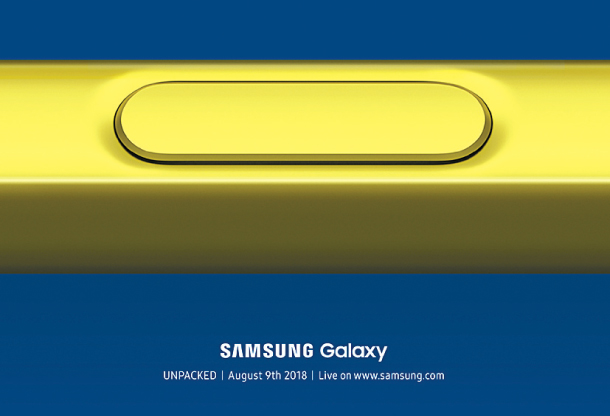 Samsung Electronics is scheduled to unveil its Galaxy Note9 phablet on Aug. 9 in New York, according to an invitation the company sent to media on Thursday.

The unpacking event for the next flagship smartphone will take place at 11 a.m. local time on Aug. 9, or midnight on Aug. 10 in Korea, at the Barclays Center in Brooklyn, New York. The showcase will also be livestreamed on the Samsung website.

Unlike previous years, Samsung opted not to include a catchphrase for the new model on the invitation - the Note8 missive came with the slogan “Do bigger things” - instead showing a magnified image of the button on the Note series’ signature S Pen stylus in gold on a blue background.

The teaser video released with the invitation confirms that the button is on the S Pen, indicating that the new stylus will have enhanced features.

Some early reports speculate that Samsung has added Bluetooth to the stylus, while other rumors guess that the pen will include a microphone to allow users to make phone calls. The button could be used for capturing images or video on the phone.

According to a series of leaks, the Note9 has a 6.4-inch super AMOLED display - even bigger than the Note8’s 6.3 inches and S9+’s 6.2 inches. Aside from the increased size, there are few rumors suggesting any other dramatic changes to the phone itself, implying that the revamped S Pen could be the most revolutionary feature in the new device.

The event for the Note9 comes about two weeks earlier than the Note8, which was first showcased on Aug. 23 last year and began shipping Sept. 21.