‘The Spy Gone North’ to be shown in 111 countries

‘The Spy Gone North’ to be shown in 111 countries 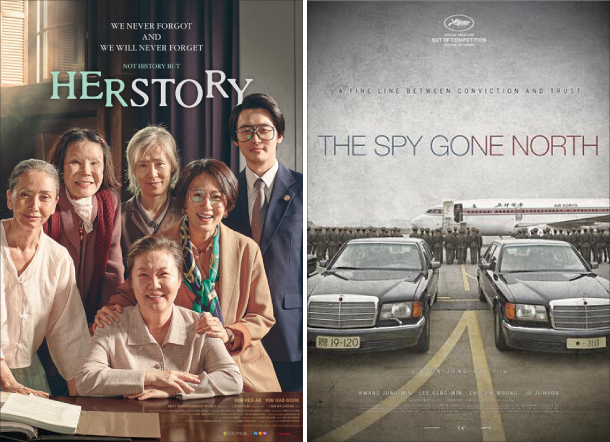 English posters for the movie “Herstory,” provided by Next Entertainment World, left, and “The Spy Gone North,” released by CJ E&M. [YONHAP]

Domestic spy thriller “The Spy Gone North” has been sold to 111 countries around the world, the film’s local distributor said Thursday.

Directed by Yoon Jong-bin of “Nameless Gangster: Rules of the Time” (2012), “The Spy Gone North” premiered to a standing ovation in the Midnight Screenings section of the 71st Cannes Film Festival in May.

Based on favorable reviews, the rights to the forthcoming film have been sold to distributors in Americas and Asian and European countries like Singapore, Vietnam, Indonesia, France, Poland, Britain and Spain, according to CJ E&M.

Dates for theatrical release are under discussion in Australia, New Zealand, Hong Kong, Japan and Taiwan, it added.

Starring Hwang Jung-min, Lee Sung-min, Cho Jin-woong and Ju Ji-hoon, the film tells the story of a South Korean spy who goes undercover as a businessman in North Korea in the 1990s to infiltrate nuclear facilities using the codename “Black Venus.” He is plagued by an inner conflict after observing the two Koreas’ leaders making a secret deal to prevent liberal candidate Kim Dae-jung from winning the 1997 South Korean presidential election.

The film is already scheduled to open on July 26 or 27 in Singapore, Australia, New Zealand and Taiwan, Next Entertainment World said.

Directed by Min Kyu-dong, best known for “All About My Wife” (2012) and “All for Love” (2005), the courtroom drama is based on a real-life reparation trial filed in the 1990s in Shimonoseki, Japan, by a group of 10 Korean women forced into sex slavery or labor for World War II Japanese soldiers.

The court trial that lasted six years produced a meaningful ruling that ordered the Japanese government to compensate the victims for the first time in history.

“Herstory” debuted at No. 3 in the local box office, drawing an audience of 44,000 on the opening day.