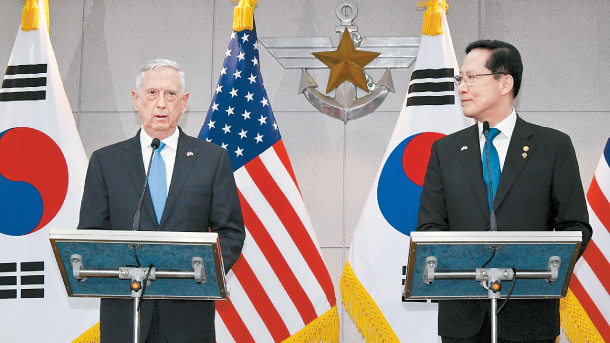 The Donald Trump administration’s goal in pursuing dialogue with North Korea is the complete, verifiable and irreversible denuclearization (CVID) of the Korean Peninsula, U.S. Secretary of Defense Jim Mattis reaffirmed Thursday in Seoul.

In a press briefing ahead of a meeting with South Korea’s National Defense Minister Song Young-moo, Mattis said American diplomats will continue their work to achieve CVID, while keeping U.S. allies in “close consultation” about talks between Washington and Pyongyang.

The Pentagon chief flew in from Beijing earlier on Thursday. Seoul was the second stop of his three-nation trip, after which he was expected to travel to Tokyo.

Highlighting the “ironclad” alliance between South Korea and the United States, Mattis said that American force levels on the Korean Peninsula would remain at the current level, a remark that came amid local speculation that Trump might try to bargain over the troops’ presence in the South in talks with the North.

The agreement signed between Trump and North Korean leader Kim Jong-un on June 12 during their summit in Singapore made no mention of CVID, a clear departure from the Trump administration’s longstanding denuclearization policy on the North and a strong indication that discussions between Washington and Pyongyang were on a tough road.

The agreement reads that North Korea “commits to work toward complete denuclearization of the Korean Peninsula.”

Trump sent jitters across South Korea after the summit when he told international reporters at a press conference that he eventually wanted to see U.S. troops leaving the peninsula.

On the decision to suspend joint military exercises between South Korea and the United States during the period of detente, Mattis said it created an “increased opportunity” for American diplomats to negotiate with the North, and increased the “prospects for a peaceful solution” on the Korean Peninsula.

Nonetheless, the U.S. and South Korean forces will remain “united, vigilant and ready” to defend against any challenge, he continued.

Seoul’s National Defense Ministry said in a statement that Song and Mattis recognized the “significant progress” made in preparations for the South to take back wartime operational control from the U.S., adding that the allies will boost cooperation in order to “fulfill the conditions” at an early date for the transfer to be made.

As long as North Korea continues to engage in dialogue with “good will,” the statement read, South Korea and the United States will continuously pursue measures to build trust with the regime and establish peace on the peninsula.