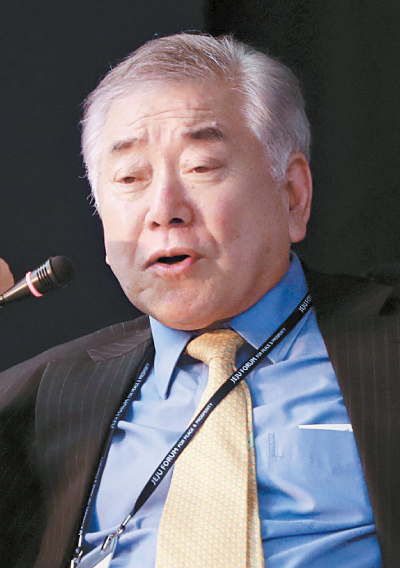 Moon Chung-in, a special adviser to the South Korean president, speaks at the Jeju Forum on Wednesday. [KIM KYOUNG-ROK]

North Korea wants the United States to acknowledge its system of one-man rule, the South Korean president’s special adviser on unification and national security affairs said at the Jeju Forum on Wednesday.

Suryong is a North Korean title enshrined in the country’s constitution that refers to the state founder, Kim Il Sung, and the current leader’s father, Kim Jong-il. It also refers broadly to the country’s system of one-man rule.

Moon defined North Korea’s demand for security guarantees in three dimensions: political, military and economic. Its desire for the United States to acknowledge its system of leadership constitutes the political aspect, he said, adding that North Korea expects recognition of its status to eventually lead to normal diplomatic relations with the United States.

Regarding military assurances from the United States, “North Korea has said clearly they do not want deployment of strategic assets along the Korean Peninsula,” Moon said. “Meaning what? B-52 or B-1B type of strategic bombers with nuclear weapons capability,” two types of planes that the North characterized as threatening.

Two other facets of military assurances include a desire for the United States to declare that “they will not undertake any conventional or nuclear threats” toward the North and a non-aggression treaty between the two countries.

“Of course, beneath all this,” he added, is a desire for “relaxation and eventual removal of economic sanctions against North Korea.”

In sum, Moon interpreted North Korea’s want for security assurances as not being outside the realm of normalcy for a country. It indicates a core craving to be acknowledged as any other sovereign state. “Of course,” he concluded, “all these political, military and economic assurances can be done when North Korea denuclearizes.”

Moon’s analysis constitutes one of the most specific breakdowns of North Korea’s wishes to date from an influential policy adviser in the current South Korean administration.

An emeritus professor of political science at Yonsei University, Moon has served as an adviser to liberal presidents, including Kim Dae-jung, Roh Moo-hyun and now Moon Jae-in. He has been a longtime proponent of engagement with North Korea.

At the forum session, he lauded the recent summit between U.S. President Donald Trump and North Korean leader Kim Jong-un as mutually beneficial for both countries.