South to work on North’s roads

South to work on North’s roads 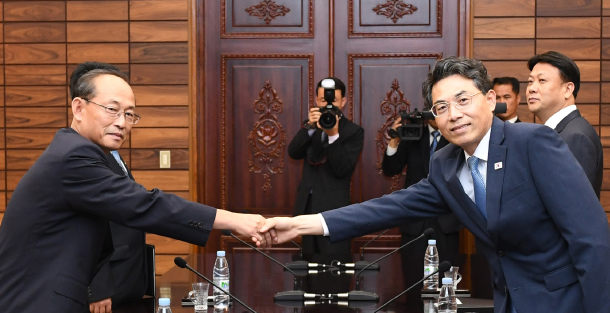 South Korea will help the North modernize its roads to comply with international standards, the two Koreas said in a joint press release on Thursday, in the first step toward connecting the separated countries’ highways in pursuit of “balanced development and co-prosperity.”

Officials from both sides reached the agreement on Thursday at Tongilgak, a North Korean-controlled building in the border village of Panmunjom. It was the latest in a series of meetings between both countries after South Korean President Moon Jae-in and North Korean leader Kim Jong-un agreed to cooperate on cross-border projects during their first summit on April 27.

According to a joint press release issued by South Korea’s Ministry of Unification, which handles relations with the North, both countries agreed to modernize roads running along North Korea’s east and west coast. On the east, the focus will be roads running from Kosong County in Kangwon Province to Wonsan, a distance of about 100 kilometers (60 miles). On the west, work will start in North Hwanghae Province’s Kaesong, just above the inter-Korean border, and run to Pyongyang, the capital, about 140 kilometers away.

The roads will be modernized so that they comply with “international standards” and “match their respective regional characteristics,” the joint press release read. Both countries will cooperate on the design and construction of roads, and a ceremony will be held at the earliest date to mark the launch of the project, the ministry said without specifying a date.

To start, the two Koreas will form a research team to study the roads, the ministry said, with a target start date of early August. The team will look at the west coast roads first and later move on to the east coast. The two Koreas will also cooperate on developing state-of-the-art technology to construct and manage the roads, the joint press release read.

South Korea’s delegation for the meeting on Thursday was led by Kim Jeong-ryeol, second vice minister for land, infrastructure and transport, and included two other officials. The North was represented by Pak Ho-yong, vice minister of land and environmental protection, and two others.

In the Panmunjom Declaration that the two Koreas’ leaders signed on April 27, both countries agreed to “adopt practical steps towards the connection and modernization of the railways and roads” on the east coast, as well as between Seoul and Sinuiju, a city on the North Korean-Chinese border.

In a separate meeting regarding rail cooperation on Tuesday, both countries agreed to modernize the North’s side of the Seoul-Sinuiju line and begin inspections on July 24. Tracks along the east coast of North Korea will receive inspections later, according to the agreement.