Hong Seung-il
*The author is the CEO of JoongAng Designworks.

The government was right to allow a six-month adjustment period — or stay on any punishment against violation — to the new 52-hour workweek which legally goes into effect on July 1. The decision came as a surprise as the Moon Jae-in administration has rejected any interruption to its drive to shift the economic paradigm from business-focused to labor-friendly.

Moreover, the concession came in the form of accepting a plea from the Korea Employers Federation — a lobby group for large employers that the progressive government distrusts. The administration has been unwavering in its faith in the merits of income-led growth and has pressed ahead with the conversion of irregular workers to permanent employees and the hike in the minimum wage despite warnings and criticism.

The government’s surprise flexibility became more understandable when the replacements of senior presidential secretaries on economic affairs and jobs responsible for spearheading the policies on income-led growth and labor relations were announced. The Blue House must have been hit by the realization that there could be some truth in criticisms of recent policies. All the data this year has been screaming about an unemployment crisis.

The confusion about the new workweek wasn’t a surprise. Newsrooms, including the JoongAng Ilbo, where overtime and work beyond standard hours are commonplace, have been wrestling with ways to accommodate new regulations. Enforcing the universal 52-hour workweek without any respect to the industry and work nature is preposterous. The policy reflects the story of Procrustes, who attempted to force people to fit into hi s iron bed by stretching or cutting off their legs.

“Under the 52-hour rule, I cannot meet my sources and finish my articles in time. I vehemently resist the new work hours,” claimed one eager reporter at the JoongAng Ilbo. The idea behind President Moon’s reforms on labor provisions is to just improve the rights of workers. But should those rights be limited to seeking jobs and balancing life and work? What about the right to work as much as you want? 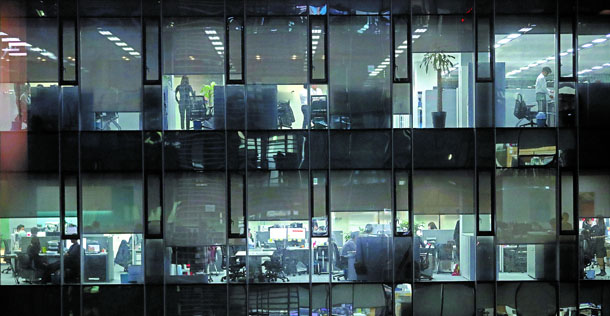 Office workers work into the night in Seoul on Feb. 28 when the National Assembly approved a revision bill that reduces working hours from 68 per week to 52. [YONHAP]

The traditional argument that shorter work hours ensures a better life does not fit today’s environment. The harsh conditions of factory workers mechanically working against the clock has long been the basis of the labor theories of neoclassical economists. In today’s world, work is not forced. In fact too much leisure can be painful. Many people with permanent and extensive work desire more free time for themselves and family. But there are also those who would do anything to have a secure job and income.

Over the six-month grace period, the government should amend the terms while giving thought to the realities of the fourth industrial revolution where robotics and artificial intelligence have the potential to replace many human jobs. Futurists envision a fully automated factory that will only require two employees, a man and a dog — the man will be there to feed the dog, and the dog will be there to keep the man from touching the equipment. When that day comes, what use is a law that punishes an employer for overworking an employee?
Korea must erase the image of overworking themselves, a habit of the industrialization days, now that it is a well-developed country. But the pace and scope needs to be accommodate the present and future conditions.

We cannot have a minister casually saying shortcomings can be addressed when they surface upon the implementation of the new workweek. President Kim Dae-jung’s campaign pledge of a five-day workweek came into force in 2004 after six years of review. That is how society adapted to it without much difficulty. Cutting back the number of hours in the workweek is an equally huge project.

If the government does not want the country to pay a dear price for this rash experiment, it may have to work on the new workweek for six years if necessary, not six months.